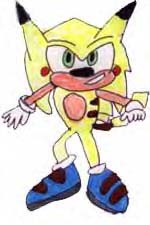 Sonichu is a fan Web Comic created by Christian Chandler, starring (at least initially) the eponymous Electric Hedgehog Pokémon and his friends.

Sonichu started as some sort of Pokémon/Sonic the Hedgehog crossover world, and the first few issues focus on Sonichu's origin, his meeting with his "heartsweet" Rosechu (based heavily on Amy Rose), and a supporting cast of other Hedgehog Pokémon of various types. But in issue #2 and from issues #4-7, the series crystallizes into its present form, as Chris-Chan takes center stage, standing his ground against, among others, evil mall cops, a malevolent witch, and internet trolls.

In May of 2010, Chris appeared to abandon work on the comic, claiming that trolls had drained his creativity. However, he announced in September 2015 that work would resume, and proceeded to upload several new pages.

Tropes used in Sonichu include:
Retrieved from "https://allthetropes.org/w/index.php?title=Sonichu&oldid=1893639"
Categories:
Cookies help us deliver our services. By using our services, you agree to our use of cookies.