Stalker with a Crush 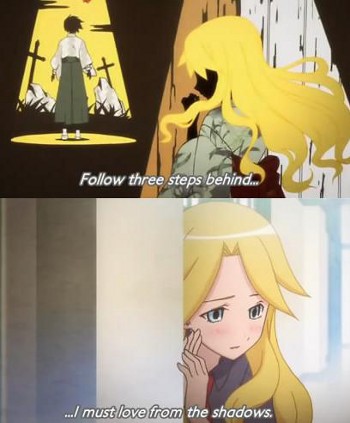 Aww... Though really, she isn't the worst of his stalkers.

A character noted for their obsession with another character. They claim that the motivation for their morally outrageous acts is a simple wish to gain attention from the crush-ee. Alternatively, the obsession may be explained as a misguided desire to "protect" [1] the crush-ee, whether or not the crush-ee wants or needs such "protection". In any case, the more sincere they seem, the creepier they are.

Why does this happen? Because Love Makes You Evil, and "If I Can't Have You, No One Will!"

Contrast with Abhorrent Admirer, where a Hollywood Homely or average woman is considered the worst thing in the world simply because she is attracted to the protagonist, even though no stalking takes place. See also All Take and No Give.

Compare and contrast with Stalker Without a Crush, who can either seem similar to this through the "Does This Remind You of Anything?" approach and/or become this through Character Development.

Examples of Stalker with a Crush include:

He practically had an orgasm when Train defeated him in episode 5. You know there's something horribly wrong when, with Train sitting on top of him, he whispers passionately, "Oh, Train, you are the best."

Retrieved from "https://allthetropes.org/w/index.php?title=Stalker_with_a_Crush&oldid=1949284"
Categories:
Cookies help us deliver our services. By using our services, you agree to our use of cookies.