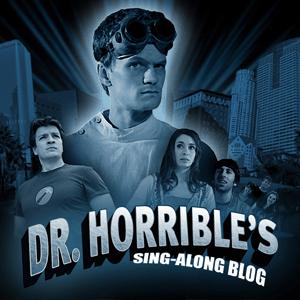 Our hero... villain... protagonist, flanked by everyone. Except Bad Horse.

An aspiring supervillain trying to get into the Evil League of Evil finds himself entangled in a Love Triangle with his arch-nemesis and a girl he knows from the laundromat. Presented as a three-part Musical Web Original Vlog Series, created by Joss Whedon out of his own pocket as a more-or-less direct result of the Writer's Guild strike of 2007-2008.

The series was released for free until July 20, 2008. After that time it was placed on iTunes for purchase (USA, Canada and UK only) and for free with ads on Hulu.com (United States only) with the revenue from both going to pay the cast and crew. Overwhelming response crashed the servers, and vigorous international response prompted the team to make the videos viewable internationally. A DVD was released in December, 2008.

There's an an official site with liner notes for the various songs, merchandise links, and other goodies. There are also several Prequel comics: three half-length ones on the Dark Horse Myspace page for Captain Hammer, Moist and Penny, a full-length print one-shot for Dr. Horrible himself, and a 3/4 length comic featuring the ELE and Johnny Snow that's exclusive to the trade paperback collecting all the previous comics, all written by Zack Whedon.

There is also an official fansite. And a fanmade prequel, Horrible Turn, that has been recognised by Joss as "itsy kitschy glitzy." Whether that is to be taken as a compliment remains to be seen. Also on the fan front is Doctor Octoroc's 8-bit version of the musical.

Rumors swirled about a Sequel for some time before being officially confirmed by whedonopolis. It is currently in the process of being written. Little else is known.

The series won the 2009 People's Choice Award for "Favorite Online Sensation" as well as several 2009 Streamy Awards for:

(In addition, the award for Best Female Actor in a Comedy Web Series went to Felicia Day, but for her performance in The Guild, not Dr. Horrible).

It also won the 2009 Emmy for "Outstanding Special Class Short-Format Live-Action Entertainment Program", making it potentially the first show to have won an Emmy without having ever been aired on television. Possibly a unique honor; definitely exceptional. It also picked up the 2009 Hugo Award in the more conventional "Best Dramatic Presentation, Short Form" category.

The DVD commentary takes two forms—a traditional commentary, and Commentary! The Musical, which is Exactly What It Says on the Tin and, well, just see that article. Also see the zany theories page for the show. After you've seen the show.

From this point forward there are unmarked spoilers. Read after seeing the 'sodes. The trope references won't make much sense until you do, anyway.