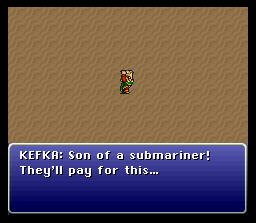 Ted Woolsey was the primary translator for most of Square's SNES-era RPGs. He is a polarizing figure in the video game community, even today. Depending on who you ask, Woolsey was either an iron-fisted dictator who was convinced that American gamers were morons or a hard-pressed grunt who was the primary reason the scripts for these games weren't completely remolded. Either way, his impact was keenly felt. He frequently modified the scripts he was handed in order to render them more accessible for American release. Fans coined the term "Woolseyisms" to refer to places where Woolsey had obviously been tinkering with the original Japanese.

Here's the thing. Woolsey's changes? They worked. Some of the lines were so well integrated into the collective consciousness of the game that they have been embraced by the fandom instead of reviled. While a good number of the script changes were probably unnecessary, many fans have come to the agreement that they don't hurt the final product; sometimes they even make it better. The script has diverted from the original -- maybe wildly -- and yet, it works anyway, just like a good localized translation should.

That's a Woolseyism: The Pragmatic Adaptation's answer to a Cut and Paste Translation. It can also apply to scene additions that weren't originally in the original source.

This sometimes leads to the strange effect that re-releases with more literal or accurate translations, whether they are purely literal or merely closer to the original while still being localized, can actually start wars between fans of the Woolseyisms, the diehard purists, and the poor saps who only know one way to read the story and have no idea what's going on. Attempts to appease the first two groups have led more recent re-releases to reuse some of the more favorite lines. After all, who can think of Final Fantasy IV without wanting to scream "You Spoony Bard!" at the top of their lungs?

Woolseyisms and well-made dubs overall are most likely to be found within translated Seinen anime, where even with the Animation Age Ghetto, translators know better than to attempt to turn an adult program into a low-quality kids' show. Shonen anime, with their younger demographics, usually don't fare as well. Woolseyisms are also so common in Latin American dubs that many people actually prefer watching the Hispanic dub rather than the Japanese original.

Atlus.com lays bare the processes of Woolseyizing with their Production Diaries. Some are about Woolseyizing, but others are about localization in general -- marketing, website design, an so on. Atlus is currently considered the company that most does Woolseyisms to good effect, since their RPGs, being much more Japanese-flavored than other companies' series, require lots of re-interpretation and adaptation of idioms and concepts. In the process, characters are given attitudes and verbal patterns that make them distinctive and give them sometimes even more fleshed out personalities.

As a rule of thumb, the requirements for a Woolsey-like translations are good translators (of course), good script adapters (sometimes translators and adapters are the same person, sometimes they're not), a good communication with the developers/animators/filmmakers and, in the case of video games, a good localization testing team. The best way to get this requirements is either that the producing company and/or the publisher have their own localization department, or hiring a reliable outsourced translation company which is properly familiarized with the product.

Compare Good Bad Translation. Contrast They Changed It, Now It Sucks, or Macekre. Please note that this trope is about script changes in translation that do not change the actual story flow and only exist to ensure meaning is conveyed between cultures; the process of throwing a script out entirely and rewriting it nearly from scratch is a whole other trope and can of worms.

Please note that this has nothing to do with Richard Woolsey from Stargate SG-1 and Stargate Atlantis.

Examples of Woolseyism are listed on these subpages:
Retrieved from "https://allthetropes.org/w/index.php?title=Woolseyism&oldid=1775080"
Categories:
Cookies help us deliver our services. By using our services, you agree to our use of cookies.