Everything About Fiction You Never Wanted to Know.
(Redirected from Shonen)
Jump to navigation Jump to search
MOD: To be consistent with Shojo, the category should be named "Shonen Demographic". 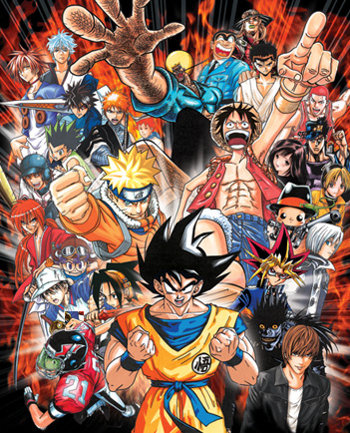 Shōnen manga is manga published in Japanese magazines aimed primarily at tween and teenaged boys. Shōnen anime is anime based on Shōnen manga. It is not a genre.

Japanese fiction aimed at this demographic tends to be focused more on "action" than relationships, with romance generally either perfunctory or played for comedy.[please verify] Physical combat is a common element,[please verify] and the cast is predominantly male.[please verify]

Shōnen series were the first to be brought over en masse to the Western world, because it was the closest match to what was being aired by Western networks at the time (nearly all popular Western animation either is geared towards males or has Multiple Demographic Appeal). Thus, it makes up much of the popular American perception of anime.

In Japan, "Shōnen" is a designation of the stories that were published in a particular class of magazines,[please verify] not a label that describes the genres of the stories in those magazines.[please verify] That leads to series that are different from the typical Shōnen style but still count as examples, and series that follow all the typical Shōnen tropes but aren't Shōnen because they didn't originate from a Shōnen magazine.

Examples of Shōnen manga include:

Other Examples in Shonen Jump

Retrieved from "https://allthetropes.org/w/index.php?title=Shōnen_manga&oldid=1917857"
Categories:
Cookies help us deliver our services. By using our services, you agree to our use of cookies.