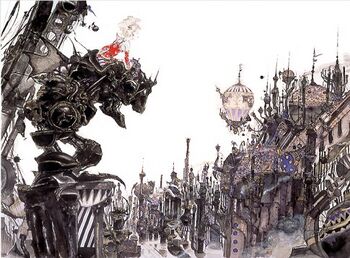 The sixth entry into the testicle-explodingly popular Final Fantasy series, and a source of nostalgia for the SNES generation. Popular gaming site IGN ranked Final Fantasy VI as the #1 Final Fantasy game. Final Fantasy VI has also made countless top 10 Games of All Time lists. It was even one of the featured covers of Game Informer's 200th issue. The game was originally marketed outside Japan as Final Fantasy III because only the first and fourth games had been marketed internationally at the time.

The story takes place in a world where, one thousand years ago, a war between three deities devastated the world. During this "War of the Magi", the Warring Triad of deities turned many humans into Espers (entities endowed with incredible magical powers), who then shared their magic with humans in an effort to recruit more soldiers for the war effort. At the war's conclusion, the three deities of the Triad sealed themselves and their powers away in the interest of preventing future conflicts (since the War of the Magi had left the world in ruins). The remaining Espers joined the Triad, while the few remaining magically-gifted humans remaining were persecuted and hunted into extinction. As a result, magic was lost to human civilization.

In the present day, human civilization has rebuilt itself with the aid of technology, and magic is known only as myth and legend. Emperor Gestahl of the southern continent believes the legends, though, and has built himself an army of conquest based on a new technology—the fusion of machinery and magic known as Magitek. Three army leaders (two of whom are magically enhanced) help him in his war: the brave general Leo, the conflicted general Celes Chere, and the mad general Kefka Palazzo, a Psycho Prototype bent on godhood who's slowly gaining power...

Standing against Gestahl is a ragtag band consisting of a thief (err, treasure hunter), a king, the king's runaway twin brother, a ninja, a samurai, two children, a gambler, some animals, an old mage, a mime and—most importantly—a frightened young woman with no memory and unexplainable powers at the center of it all...

With fourteen playable characters, Final Fantasy VI boasted one of the largest rosters of any RPG at the time... and provided nearly all of them with unique spotlights in the plot, to boot. The game is well-loved for its use of Mood Whiplash, constantly bouncing back and forth across the Sliding Scale of Silliness Versus Seriousness, and giving every character their sincere Tear Jerker moments alongside (at times very cartoonish) comedy scenes.

Like Final Fantasy IV, the game was subject to Nintendo's censorship... but it still managed to tackle quite a few controversial (for the time) topics: genocide, slavery and even genetic engineering are seen in their full, gruesome (16-bit) detail. The original English translation was done by Ted Woolsey and is widely regarded by fans as one of the best translations of the 16-bit era... if not necessarily the most faithful (Woolsey himself was the Trope Namer for Woolseyism, after all).

Originally released on the Super Nintendo, Final Fantasy VI has been ported twice since then (using the original title). The first port was on the PlayStation: this one added a number of CGI cutscenes throughout the game, though it made no other alterations (aside from severe slowdown and sound emulation issues). The other port was on the Game Boy Advance and was much more technically competent: while it had no additional cutscenes, it included new dungeons, gear and Espers, as well as a new translation (the PS 1 port recycled Woolsey's script) that was more faithful to the original script while retaining many of Woolsey's original lines and all of his name changes. The GBA port also fixed many bugs, rebalanced the battle system, made the graphics much easier on the eyes and featured slightly remixed music (which is a source of contention for some fans). The SNES version has been re-released on the Virtual Console in Japan, Europe and North America, and the PlayStation port is available on the PlayStation Store.

Final Fantasy VI is the Trope Namer for:
Tropes used in Final Fantasy VI include:
Retrieved from "https://allthetropes.org/w/index.php?title=Final_Fantasy_VI&oldid=1868531"
Categories:
Cookies help us deliver our services. By using our services, you agree to our use of cookies.