Everything About Fiction You Never Wanted to Know.
(Redirected from Worlds Smallest Violin)
Jump to navigation Jump to search 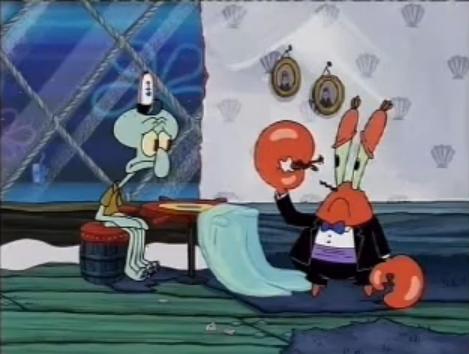 Lucky for Squidward, listening is free.

Bob has accidentally allowed his subscription to Better Homes Than Yours to expire. Now he's going to miss the finals of the Fall '10 wrap-around porch competition. He'll never find out if Mrs. Custerly's balsa-wood extravaganza will win out against that retired marine biologist's oak/rattan experiment. Bob is in deep, deep dejection when he comes across Aerith.

"Woe is me," says Bob. "Bloody-well woe am I." Aerith, who has just taken her terminally ill mother to the hospital for another round of chemo, asks Bob what is afoot. Bob explains the situation to her and adds that the very weight of his depression is leading him to contemplate suicide.

With an eyebrow cocked at a jaunty angle, Aerith begins sawing two fingers back and forth across each other. "Here's the world's smallest violin," she says. "Let me play you a sad song on it."

A predominantly Western gesture, the World's Smallest Violin is given to a person who is exaggerating the sorrow of his/her predicament in order to gain sympathy; the person who does the giving presumably has none. There are other, much more rude, hand gestures available to tell someone they're being an ass, but the violin is more sophisticated. It plays on the idea that wangsty characters expect the Warsaw Symphony to pop up out of nowhere to provide some background for their soliloquies. This gesture is rare both in real-life and in fiction. Usually it will be given by the Deadpan Snarker, possibly villainous.

"BAAAWWWWWW" and "somebody call the WAAAAAAH-mbulance" are the internet equivalents.

Examples of World's Smallest Violin include:

Mr. Pink: Do you know what this is? It's the world's smallest violin playing just for the waitresses.

Margaret: Charles, do you know what this is? It's the world's smallest violin, and it's playing just for you.

Run your mouth when I'm not around, it's easy to achieve
You cry to weak friends that sympathize
Can you hear the violins playing your song?
Those same friends tell me your every word

"In a tight job market, should we be surprised that some Ivy League grads have problems? Welcome to the 21st century, and excuse me while I practice the world's smallest violin."

Linkara: Are we going to start a flashback involving Wolverine's past? Give me a second. *Goes off screen and came back with a violin.* You may continue.

Peter: Hey, if any of you falls down and no one is around to hear you, do you make a sound?
Tree 1: Of course, Frank fell down last week and he wouldn't stop talking since.
Frank: Oh stand there and bitch! No one stops and takes the time to HELP MEEEE!
Tree 2: (rubbing branches together) Ooh, look at me Frank, I'm playing the world's smallest violin!