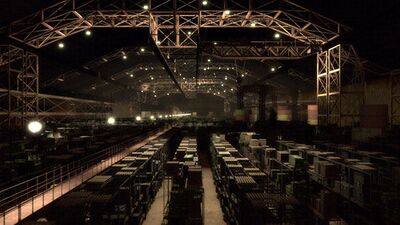 Sci-Fi series about Secret Service agents Pete Lattimer and Myka Bering who hunt down magical artifacts and store them in the titular warehouse. Essentially, it expands on the warehouse where they put the Ark of the Covenant in Indiana Jones.

And outside of hunting down the new artifacts, there is always a dilemma cooking up back at the warehouse where one of the miscellaneous items is being experimented on, stupidly misused or otherwise going haywire.

You could say it's SCP Foundation: The Series. Or emphatically say it's GURPS Warehouse 23: The Series. Or the direct descendant of the 1990s-vintage net.document Secret Contents [dead link] of a Certain Government Warehouse.

Warehouse 13 is part of the "Syfy-verse": it kinda exists in the same fictional universe as Eureka and Alphas.

Tropes used in Warehouse 13 include:
Retrieved from "https://allthetropes.org/w/index.php?title=Warehouse_13&oldid=1826313"
Categories:
Cookies help us deliver our services. By using our services, you agree to our use of cookies.