The World Ends With You 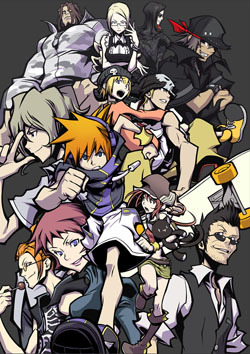 Also known as Subarashiki Kono Sekai: It's a Wonderful World, The World Ends With You is an action RPG by Square Enix and Jupiter (you know, the Chain of Memories people) that tells the story of a teenage, angsty and antisocial tagger named Neku Sakuraba who wakes up in Shibuya, Tokyo, with no idea of how he got there. He discovers that not only can he not leave Shibuya, but he has the "pleasure" of playing the deadly weeklong "Reapers' Game"—and if he loses, he'll be erased from existence.

Neku eventually meets and befriends Shiki Misaki, your typical Shibuya fashion slave; Daisukenojo "Beat" Bito, a rough skater; his street-smart, adage-loving partner, Raimu (aka "Rhyme"); and Yoshiya "Joshua" Kiryu, the Jerkass Insufferable Genius. Armed with strange psychic powers, the group tries to survive their time in Shibuya... however, they are confronted at every turn by the mysterious Reapers.

The soundtrack consists of modern, local acts from in and around the real-life Shibuya, and the graphics are inspired by Shibuya's fashion and trends, with character designs by Gen Kobayashi and Tetsuya Nomura. Many have commented that the latter's Signature Style works much better in the context of modern Shibuya than it has in previous games he's worked on.

Battles are complex and fast-paced, with deep character-customization systems and a large number of in-battle actions to choose from. These battles use all of the DS's unique features, and at higher difficulties not paying equal attention to both screens can be deadly, so the game is often noted for its difficulty and complexity. It has achieved a high level of critical acclaim, particularly for how different it is from its contemporaries.

For more info on this game's colorful cast, feel free to check out the character sheet.

Square Enix has released an official (and free!) translation of the one-shot tie-in manga here.

There has been talk of a sequel for years - in the September 2010 issue of Nintendo Power, there was an interview with Nomura (the game designer), who stated, "I definitely want to make a sequel. I’m very busy working on other titles right now, but when the time is right, I would love to make another installment of The World Ends with You.” If nothing else, the main cast and the Reapers' Game made an appearance in Kingdom Hearts 3D's Traverse Town world, and now Nomura has teased that this could be taken as a hint of something to come...

A port for mobile devices subtitled "Solo Remix" was released in 2012, for iOS and in 2014 for Android. This version maintains most of the game systems of the original, but modified so Neku and his partner can share a single screen. Another single-screen port, this time named "Final Remix" and with an extra episode, was released for Nintendo Switch in 2018.

A 12-episode anime adaptation was revealed to be in production in 2020, and premiered on April 2021. The sequel, titled NEO: The World Ends with You, was released on July 27, 2021 for Playstation 4 and Switch, with a Windows version released on September 28, 2021.

See also Sh15uya and Gantz, which have similar premises. For a game similar in visual and musical aesthetic rather than story matter, see Jet Set Radio.

(Note: It's A Wonderful World is also the title of a 1939 live-action Screwball Comedy starring Jimmy Stewart and Claudette Colbert.)

Tropes used in The World Ends With You include:
Retrieved from "https://allthetropes.org/w/index.php?title=The_World_Ends_With_You&oldid=1940109"
Categories:
Cookies help us deliver our services. By using our services, you agree to our use of cookies.