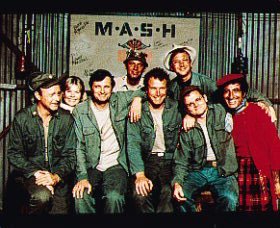 One of the most commercially and critically successful series in television history, M*A*S*H (short for Mobile Army Surgical Hospital, a type of Army field hospital first activated in the last month of World War II) is, to quote its lead character Hawkeye Pierce (Alan Alda), "Finest kind."

The show ran on CBS from 1972 to 1983, seven years longer than The Korean War during which it takes place. At first seen as a wacky, slightly edgy sitcom based on Robert Altman's 1970 movie, the series moved away from strictly comedic storylines early in its run (Season 1's "Sometimes You Hear the Bullet" was the first Tear Jerker), and began to incorporate dramatic plotlines in conjunction with comedic ones in the same episode.

"Abyssinia, Henry" was the final episode of the third season, and is seen as a turning point for the series. It was the final episode for both Henry Blake (McLean Stevenson) and "Trapper" John McIntyre (Wayne Rogers), and its tragic ending (Henry's plane home is shot down; "there were no survivors") delineated the line between "Funny M*A*S*H" and "Dramatic M*A*S*H," as many fans would later divide the series. The fourth season was crucial to its success -- very few series, ensemble or otherwise, had ever lost such significant characters and kept its audience. The creators' decision to replace Henry and Trapper with completely different character types in Colonel Potter (Harry Morgan) and BJ Hunnicutt (Mike Farrell) succeeded, and the show built on its high Ratings.

In the "Dramatic M*A*S*H" phase, character development was key, and even one-note characters such as "Hot Lips" Houlihan (Loretta Swit) became more sympathetic and complex (as seen in Season 5's "The Nurses," in which she asked her nurses, "When did one of you ever even offer me a lousy cup of coffee?"). This shift probably led to Frank Burns (Larry Linville) getting a psychiatric discharge, since he had been developed as an unlikeable character with no room for change (Larry Linville even stated dislike for the character being so unlikeable). He was replaced by Charles Emerson Winchester III (David Ogden Stiers), a snooty Blue Blood doctor who was by contrast a real asset to the staff and even eventually becomes a nicer guy in his own way.

Other ways in which the series changed how the Sitcom was perceived was by its use (or disuse) of the Laugh Track, commonly imposed by the networks if a studio audience was not going to be present at the episodes' filming. The show's creators grudgingly accepted the laugh track, but soon imposed rules on when it was not to be used (during any of the operating room scenes), and dropped it entirely in certain non-typical episodes. Eventually they abandoned it entirely. The laugh track was never used when the series was broadcast by the BBC in the UK. (The DVDs of the series offer the option to watch the shows with or without the laugh track intact.)

M*A*S*H revolutionized the use of camera movements and editing styles on television -- for example, in its use of long Tracking Shots moving with the action (usually of soldiers being moved from helicopter/bus/Jeep to the OR). Also, later in its run it experimented with unusual storylines married with different camera moves and screen devices.

The use of Boom Up and Over was new to television at the time. The use of this technique in sequences where camp announcements were shown from the 'perspective' of the loudspeaker was groundbreaking and memorable.

M*A*S*H was noted for doing Something Completely Different very well -- keeping the tone of the show consistent while experimenting with unusual storylines or storytelling techniques. "Hawkeye" is a 25-minute monologue by Alan Alda. In "Point of View," the entire episode is literally seen through the eyes of a wounded soldier via POV Cam. "Life Time" is told in Real Time, with a clock in the corner ticking off the minutes as the doctors race to replace a soldier's crushed aorta. It also has the obligatory Fever Dream Episode, Clip Show and a (largely improvised) Documentary Episode told as a series of television interviews with the characters.

Considering that the original novel consisted mostly of young doctors boasting about how much sex they have and shows a truly awful degree of sexism [1] to produce such a long, successful and at times thoughtful series is a fine example of Pragmatic Adaptation, a very nice change in a world full of Adaptation Decay. Of course, Dr. Richard Hornberger, one-half of the writing team behind the pseudonymous author of the original book and allegedly the model for Hawkeye, didn't see it that way, and was known to rant about it at length (in a sequel, MASH Mania, he has his version of Hawkeye remark how he enjoys going down to the State University to "kick the shit out of a few liberals").

Fun fact: Alan Alda was inspired to take over creative control of the show because he desperately needed the money that came with more responsibility. A year before, his business manager "invested" his entire fortune in a Ponzi scheme without his knowledge or approval. Alda lost almost everything.

Has now a character page (under construction).

See also the page on the novel MASH.

Retrieved from "https://allthetropes.org/w/index.php?title=M*A*S*H_(television)&oldid=1894831"
Categories:
Cookies help us deliver our services. By using our services, you agree to our use of cookies.