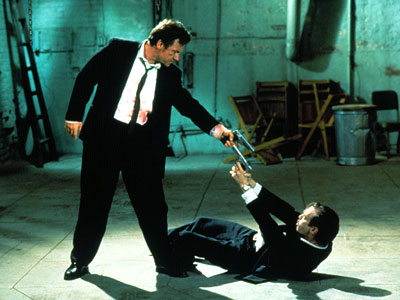 Reservoir Dogs is Quentin Tarantino's 1992 debut as a director and a screenwriter. The film largely takes place in the aftermath of a jewelry heist gone wrong. After the robbery is interrupted by the police, the surviving criminals -- all of whom are using color-based pseudonyms, and none of whom knew the others before this job -- escape to an abandoned warehouse and try to work out what went wrong, eventually deciding that there must be an undercover cop in their midst. Frequent flashbacks give the back story of several of the characters and fill in the details of the crime, telling the story in a non-linear fashion (which would become Tarantino's Signature Style); in fact, the movie contains a lot of elements Tarantino would use in later films, such as brutal violence and Seinfeldian Conversation (though not at the same time).

A video game was produced that followed the plot of the movie and allowed the player to actually commit the heist that was only alluded to in the film.

Tropes used in Reservoir Dogs include:

There is confusion among some viewers as to whether Mr. White shot Mr. Orange, or if one cop shot first to prompt the others. Even if he wasn't shot by Mr. White, he was still left bleeding and dying for roughly an hour after his first gunshot and was shot a second time by Joe. It's unlikely he would have survived.

Ultimately subverted in that it turns out the cop dude knows who the rat was and wasn't saying anything under the torture.

Retrieved from "https://allthetropes.org/w/index.php?title=Reservoir_Dogs&oldid=1963295"
Categories:
Cookies help us deliver our services. By using our services, you agree to our use of cookies.