Jump to content
(Redirected from Two and A Half Men) 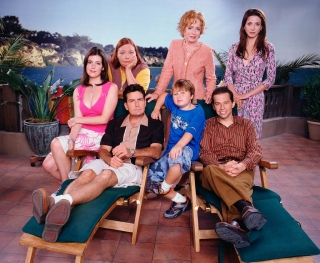 Ladies' man Charlie Harper is living the good life as a successful jingle writer in a seaside mansion in Los Angeles. That is, until his nerdy brother Alan's ex-wife throws him out and he's forced to move in with Charlie, bringing his ten-year-old son Jake with him. Now, not only does he have to cope with Rose, the stalker who lives next door, his conniving and guilt-tripping mother, and his sarcastic housekeeper Berta, but also Alan's various neuroses and Jake's complete lack of any sort of tact or personal hygiene. Sadly however Charlie's womanizing nature eventually catches up with him in 2011 when he catches a train the hard way. Enter suicidal billionaire Walden Schmidt as the new owner of Charlie's home. After quickly becoming friends with Alan he continues to let him and Jake live with him while they get over the loss of Charlie.

The show first began airing on CBS in 2003 and is currently[when?] in its ninth season. Season eight was cut short after lead actor Charlie Sheen was fired due to his self-destructive breakdown in 2011, one effect of which was a public feud with series creator Chuck Lorre. The show has continued with Ashton Kutcher as Walden, the show's new lead.

Tropes used in Two and a Half Men include:
Retrieved from "https://allthetropes.org/w/index.php?title=Two_and_a_Half_Men&oldid=1831938"
Categories:
Cookies help us deliver our services. By using our services, you agree to our use of cookies.