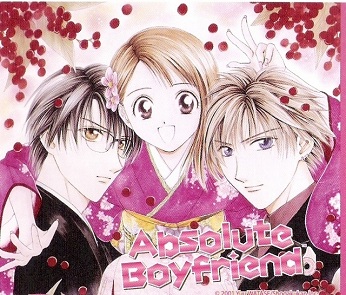 What do you get when you swap the traditional roles of a Magical Girlfriend series? A Magical Boyfriend series, of course! Absolute Boyfriend, or Zettai Kareshi, is a piece-of-fluff series by Yuu Watase (of Fushigi Yuugi fame) in which the lead girl -- Riiko Izawa -- gets her very own handsome dream guy... whom she orders over the Internet!

Riiko is a fairly average girl, a sort of female Unlucky Everydude (Everydudette?). She has had all of her professions of love rejected, and is completely oblivious to the fact that she is loved by the boy next door, who always teases her. One day, after lamenting yet another rejection, she finds a cellphone which she returns to its owner, who is a salesman and offers to sell her all sorts of things. When he asks her what she really wants, she tells him all she wants is a boyfriend.

So the salesman gives Riiko a Web address for site from which she can order a free trial of a "figure" which she assumes to be some sort of sex doll. She goes ahead and orders one, but when it shows up, it is freakishly realistic and good looking... and naked. When she kisses it, it awakens and is clearly besotted with her. She's freaked out about this at first (it, or he, thinks she wants to have sex with him... but fully respects it when she says "no"), but soon realizes he is the perfect guy. She names him Night, because he's part of the Nightly Series of figures.

He's only a free trial though, and she was supposed to give him back after three days; however, time runs out, and she is told she owes Night's creators $1,000,000! Luckily for her, she is able to persuade the salesman she met in the first place to let her repay them by teaching Night "everything about girls" instead (he's a prototype) and by forking over what money she does have. Thus, Night joins Riiko's class as Night Tenjo, and Absolute Boyfriend begins!

Yes it isn't exactly deep, but as Yuu Watase said, it was never meant to be.

For a same basic story with a gender-swap, see Yuria 100 Shiki.

Though there is no anime for the series, it has been adapted into an 11-episode Japanese tv drama and 1 special movie.

Tropes used in Absolute Boyfriend include:
Retrieved from "https://allthetropes.org/w/index.php?title=Absolute_Boyfriend&oldid=1133749"
Categories: