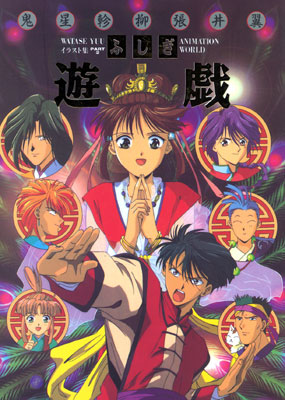 When gluttonous, underachieving schoolgirl Miaka and her best friend Yui find a strange book in the library, it changes their lives forever. Shi Jin Ten Chi Sho (literally, The Four Gods Earth and Sky, but rendered as The Universe of the Four Gods in the North American release) is an ancient book that is a gateway into another world that resembles medieval China -- a gateway through which Miaka and Yui fall. Although Yui is sent back to Japan almost immediately, Miaka is trapped in the story. There she finds that she is the Suzaku no Miko -- the prophesied priestess of the god Suzaku, who must gather together seven holy warriors in order to summon the god and save the country of Konan from its enemy, the country of Kutou.

(Meanwhile, in the "real" world, Yui is reading about Miaka's adventures in the book, trapped by a sort of horrified fascination. Worse, she suffers many of the harms and indignities that Miaka undergoes, from soakings with water to bloody wounds.)

Although she is sympathetic to Konan's cause, Miaka is worried about Yui and wants to go home. When she gets a chance to do so, she takes it, but upon returning to the library she cannot find Yui -- who has been drawn back into the book and installed as the Seiryuu no Miko -- the priestess of Seiryuu, the god who favors Kutou, and similarly charged to summon the deity. When Miaka finally returns to the world inside the book, she finds that she and her once-best friend are now on opposite sides of what promises to be a bloody and devastating war. The only way for Miaka to prevent utter genocide is to win the race to be the first to summon a god...

Easily the most famous of Yuu Watase's works, Fushigi Yuugi (sometimes known as Mysterious Play, which the English-dubbed version was released as in North America) was many anime fans' introduction to shoujo series after Sailor Moon. It was popular enough to have spawned a prequel, Fushigi Yuugi Genbu Kaiden, which ran from 2003 to 2013 in Japan and was released in the US by Viz Media, who also published the English version of the original manga.

Also see the character sheet. Has a wiki. Compare with The Twelve Kingdoms.

Tropes used in Fushigi Yūgi include:
Retrieved from "https://allthetropes.org/w/index.php?title=Fushigi_Yūgi&oldid=1968992"
Categories:
Cookies help us deliver our services. By using our services, you agree to our use of cookies.