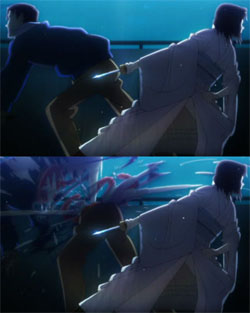 Shwing! And the gibs paint a lovely picture in the moonlight.

Two enemies of nearly equal skill meet, about twenty yards apart. They may be Ninja or Samurai. They observe each other from a distance. The aspect ratio is widescreen, letterboxed if the show is shot in 4:3. They stand at opposite ends of a very wide, low-angle shot.

On cue—sometimes triggered by an outside event, such as a slowly falling flower petal touching the ground—they break into a sprint toward each other, leaning far forward, hands on weapons. Each character is shown in a frontal shot from the other's perspective.

Reaching critical distance, they leap. Each is shown leaping in a closeup, probably from the waist down, although the leap is simultaneous.

The characters move past each other in midair, weapons drawn, but no weapon strikes are shown. This happens in slow motion. They face forward and do not look back. Alternately there is the sound of steel on steel, but events pass too quickly for the audience to see what happened. If this is an anime, expect the screen to go black and the stroke to be painted by a white or blue streak across the screen.

Both characters land in a crouching position. They are shown in a shot from the front of one character, with the other in the background. This shot is usually shown for both characters.

A Beat goes by.

One character falls to the ground, dead. Sometimes in pieces. The other stands.

Note: it is also incredibly common to have a beat go by, one character (99% of the time the hero) falls to one knee as if he has been hit, and then have the other character fall over dead. In Real Life, kendo kata #7 ends this way. Another common subversion involves revealing both combatants to have been injured (or killed).

An increasingly favoured method of ending the final fight in a movie already heavy on well-orchestrated brawls.

Contains some Truth in Television, even if embellished. Real swordfights often take only a few or even a fraction of a second (constrast this with Flynning).

Swordplay equivalent to Showdown At High Noon. One use of the Flash Step. Probably implies a One-Hit Kill. If the battle is one sided and the winner uses a flash step, then there is a good chance that the loser will preform a Snap to the Side before realizing that they've just been cut in two.

Examples of Single-Stroke Battle include:

Retrieved from "https://allthetropes.org/w/index.php?title=Single-Stroke_Battle&oldid=1896630"
Categories:
Cookies help us deliver our services. By using our services, you agree to our use of cookies.