Everything About Fiction You Never Wanted to Know.
(Redirected from Loveable Rogue)
Jump to navigation Jump to search 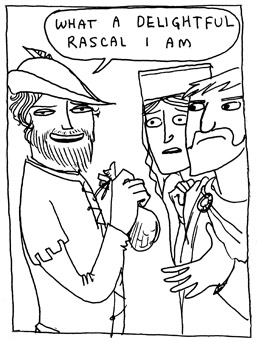 A person who breaks the law, for their own personal profit, but is nice enough and charming enough to allow the audience to root for them, especially if they don't kill anyone. It helps that none of their victims are anyone we know or that they've made sure the audience knew they were jerks, which makes it "okay" to steal from them.

Note that while morally a click below your average antihero in the sense that they might not be considered a hero at all, the Lovable Rogue is strongly associated with highly Idealistic series on the Sliding Scale of Idealism Versus Cynicism, as Cynical series tend not to place value on the concept of a Code of Honor, which is usually what makes the Lovable Rogue, well, lovable.

Their loyalties are often played with, particularly if they show up to rescue the hero. If they end up being the star of the show, expect a straight-arrow Supporting Protagonist to be the audience viewpoint character. Complicating matters further is the fact that this person is usually chased by a Sympathetic Inspector Antagonist.

A click above the Lovable Traitor, who is definitely not a nice person, but wins by lowering the audience's expectations so much, that he charms them with a few token Pet the Dog moments (which usually include helping the hero. It's amazing how much fans will overlook if they help the hero). Usually male, but female thieves tend to be considered Lovable Rogues by default.

And the g comes before the u ladies and gentlemen. That is, unless you're talking about Rouge the Bat. If the charming person is a villain instead of an Anti-Hero, then they are described as being Affably Evil. The audience will usually not root for a villain, even if he or she is Affably Evil. Usually.

Examples of Lovable Rogue include:

Retrieved from "https://allthetropes.org/w/index.php?title=Lovable_Rogue&oldid=1941956"
Categories:
Cookies help us deliver our services. By using our services, you agree to our use of cookies.