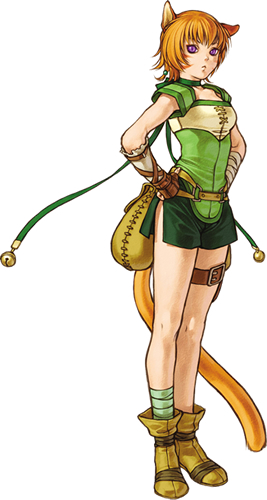 A Catgirl is a character that looks mostly like a human, but has the ears of a cat. She is usually not furry (still having human skin, human hair, a human face, a completely human nose, and a human skull and torso structure) - she's only a Little Bit Beastly. Catgirls are stereotypically female, but catboys can also be found.

Catgirls can also have other minor feline features, such as a cat tail, Cute Little Fangs, cat-like Animal Eyes, Femme Fatalons or actual claws. She often has personality traits that conform to feline Animal Stereotypes. She might also have a Verbal Tic that imitates the sound of a cat, such as "Meow" in English works and "Nya" in Japanese works, and will sometimes demonstrate Faux Paw. All these features are optional.

Some catgirls are biologically Catgirl, either because of some degree of non-human ancestry or because of a change brought upon by Magic and Powers or Applied Phlebotinum. Examples do not have to be catgirls by default, but can also be normal humans who have been turned into Catgirls. These would be a subcategory of Unusual Ears and Little Bit Beastly.

Other Catgirls merely wear cat-themed costumes, sometimes as part of feline themed Animal Motifs. These would be a subcategory of Animal-Eared Headband. Faux kitties will wear at least fake ears, and often a fake tail. Sometimes they wear gloves resembling cat paws.

A catgirl's ears and tail don't have to be that of a housecat. They can be that of any cat species, big or small.

This item available in the TropeCo catalog.

Special Note - Being female and feline is not sufficient to qualify for this trope. Do not add an example here without first making sure that it doesn't belong under another trope instead.

Not to be confused with Catwoman.

Examples of Catgirl include:

Far too many anime series to list here. Wikipedia (seriously) has a decent, but still incomplete list.

Unsorted, Both and Other

Retrieved from "https://allthetropes.org/w/index.php?title=Catgirl&oldid=1965763"
Categories:
Cookies help us deliver our services. By using our services, you agree to our use of cookies.