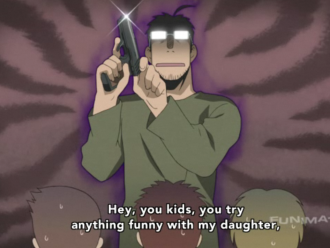 He's talking to a bunch of three-year-olds.

You know this guy. You might even BE this guy, if you're a dad. (Or you WILL grow into one, when you have a little girl.) Well aware of the sex-obsessed horndogs that teenage guys can be—probably because he was one—the Overprotective Dad wants to protect his daughter from being exploited. Unfortunately, he tends to take it all too far, holding the Eight Simple Rules For Dating My Teenaged Daughter as his personal bible.

Once he gets over his denial that his baby is all grown up, the Overprotective Dad becomes convinced that her smiling at a boy, let alone kissing or dating, is half a step away from having sex and getting pregnant. Parties are always an orgy if she is going. Thinks of himself as a Papa Wolf, but unless his concerns are a lot better justified than usual, he's probably closer to being a Knight Templar Parent. It's not just a matter of My Girl Is Not a Slut (translated for the father/daughter dynamic); it's that he doesn't trust guys around her, and he's probably also displacing some angst about "losing" his little girl. Unfortunately for the poor young man who eventually attracts her interest, the Overprotective Dad isn't going to be inclined to give him an inch—he will receive No Sympathy for any chaos that results from their courtship, and even the slightest or most obvious misunderstanding or misconception about the man will have the Overprotective Dad warning him to "stay away from her!" if he knows what's healthy for him—of course, in some occasions, it's obvious to everyone that the Overprotective Dad is merely using that as a (fairly weak) excuse to keep the suitor away from his baby girl. In the rare event that he finds a suitor he can tolerate, he will still inevitably threaten the boy with dire consequences If You Ever Do Anything to Hurt Her....

This trope is especially common in stereotypes of the Deep South, where every sweet Georgia Peach has a very large (usually fat, hairy, and drunk) father in a white tank top that usually keeps a rifle with him at all times.

If Adults Are Useless, then he'll probably just be comic relief as he huffs and puffs ineffectually. Otherwise, he may serve as a Parent Ex Machina to deliver the message that you Can't Get Away with Nuthin' and ground his daughter at some point. Somewhere between those two is the Overprotective Dad who ends up enforcing a Shotgun Wedding after the condom breaks.

The entire concept is very easy to suffer a Squick over, especially if you believe that Freud Was Right, or if the father is a Pervert Dad.

Ironically, if he has a son, he may even applaud or encourage him if he treats girls in the exact way he doesn't want other guys to treat his own daughter.

Nowadays sometimes a Subverted Trope due to Gender Flip. Meaning fathers who are more concerned about the girls/women their sons date. This is due to the breaking of some Double Standards regarding Abuse Is Okay When It Is Female On Male and cougars (i.e. older women dating younger men), so it is Truth in Television in a way.

Examples of Overprotective Dad include:

Rather, he tends to act like one in order to tease Tomoya, but it's apparent that he really likes Tomoya and approves of his relationship with Nagisa. How many overprotective dads let their daughter's boyfriend live at their house?

Millet forces Milton to row across the Pacific (as Product Placement) before he will let Milton marry his daughter, but reneges on this promise and locks her up in a fortress.

It doesn't help that these girls are nowhere near virgins already.

Retrieved from "https://allthetropes.org/w/index.php?title=Overprotective_Dad&oldid=1920236"
Categories:
Cookies help us deliver our services. By using our services, you agree to our use of cookies.