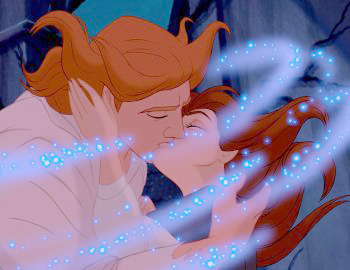 It's the most powerful thing in the world!

The Power of Love times Over Nine Thousand.

Fairy Tales, especially the edited Disney versions, usually have a few things in common: The Rule of Three, and True Love's Kiss.

Finding your true love will cure 99.9% of magical maladies and curses, or your money back!

This trope is so ingrained in the psyche of western audiences it will never really be discredited, but often subverted. Its actually a Dead Unicorn Trope that's Newer Than They Think—notice how many of the original versions of the stories listed below had nothing to do with a "kiss". It is also often modified to True Love's "First" Kiss as an Anvilicious lesson about chastity. Has a tendency to be a Big Damn Kiss.

Subtrope and most common form of Magic Kiss.

Examples of True Love's Kiss include:

And they all lived Happily Ever After.

Retrieved from "https://allthetropes.org/w/index.php?title=True_Love%27s_Kiss&oldid=1950314"
Categories:
Cookies help us deliver our services. By using our services, you agree to our use of cookies.