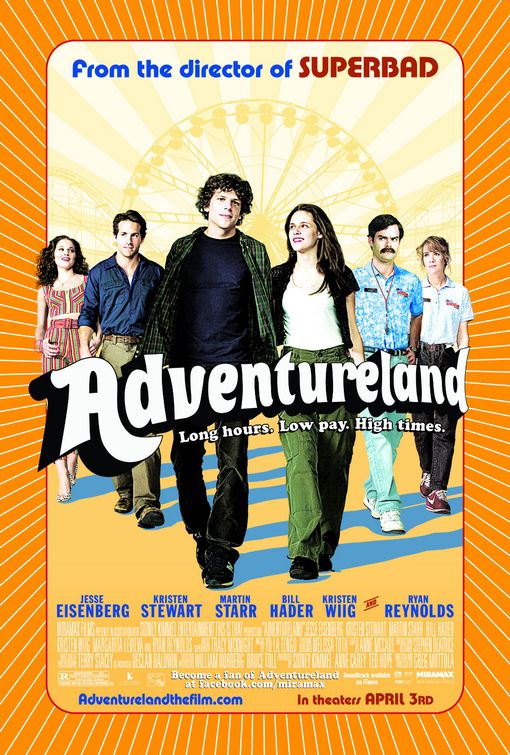 It's the summer of 1987. James Brennan, having just graduated from Oberlin College, looks forward to a vacation in Europe with a friend and then graduate school at Columbia University. One little problem: after a financial setback, his parents can no longer afford to help him pay for either. What's a poor over-educated, under-experienced lit-major Nerd to do? Oh, get a grunt job at the eponymous "Adventureland" amusement park. Hilarity Ensues.

Jesse Eisenberg stars as Brennan, Kristen Stewart co-stars as his primary love interest Emily "Em" Lewin. Ryan Reynolds provides the Romantic False Lead, one Mike Connell. Mike is a cool, Badass coworker who leads a rock band in his spare time. He once jammed with Lou Reed or at least he claims he did.

While not a box office smash, this 2009 film received good reviews and gained a respectable fan following. Written and directed by Greg Mottola, who had previously directed Superbad, Adventureland attempts a more realistic approach, rather than relying on outlandish hijinks.

Believe it or not, the "Adventureland" theme park on which the theme park is based actually exists. However, it is located on Long Island, New York. It can be found here.

Tropes used in Adventureland include:
Retrieved from "https://allthetropes.org/w/index.php?title=Adventureland&oldid=1834420"
Categories: