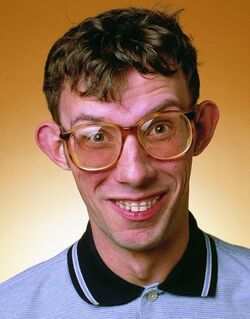 A Nerd is someone who... actually, it is easier to describe a nerd as what they are not. Not smooth, not handsome not someone you would instantly describe as 'attractive'. Not, above all else, popular outside a very narrow grouping of fellow-nerds (and usually, not at all stupid). Oftentimes, a walking, talking fashion-disaster. One definition of a nerd is someone who not only didn't attend his high school prom, but would be puzzled or even offended at the suggestion that he would want to. Most nerds portrayed in the media actually fail this test, but real-life nerd Joss Whedon passes.

The term gets conflated with Geek fairly frequently, as it happens that a nerd can be fairly obsessive/informed about a particular topic.

The nerdiest nerd is a nerd who isn't even a Geek.

One of the odd features of the nerd on TV is that they will be over-formally dressed (probably as a result of the Hollywood Dress Code) usually, at least a plaid polo shirt and slacks. In fact, in real life, both nerds and geeks tend to dress more casually than the average person, because they usually don't care as much about clothes or appearances. (The hyper-formality is likely due to another stigma - that nerds let their parents dress them.) There are some nerds whose clothes would fit the stereotype, though.

Many, if not most, nerds are so socially inept because they actively dislike company with Average Joes and not so much because they just don't know how to act. Well, according to them.

Most people may have first heard this term from the Sitcom Happy Days, where it was Fonzie's pejorative of choice, but etymological studies have traced it back to Dr. Seuss' book If I Ran The Zoo, though he spelled it "nurd". Note that, like with Geek, the definition of a nerd is not set in stone and can vary greatly depending on context.

See also Geek, Asian and Nerdy, Black and Nerdy, Hollywood Nerd, Emo Teen. Contrast Nerd Core. Related to I Just Want to Have Friends when the nerd wants to be more popular.

Examples of Nerd include:

Retrieved from "https://allthetropes.org/w/index.php?title=Nerd&oldid=1639573"
Categories:
Cookies help us deliver our services. By using our services, you agree to our use of cookies.