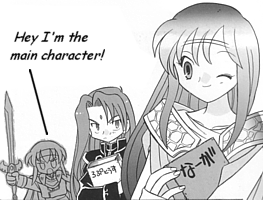 In short, when the author gets so incredibly fixated on a single character, family or group that he or she forgets that they have an incredibly diverse and powerful cast, many of whom are more interesting than the focus character (or at least that's what everyone will think when they're not getting screen-time). A handful of characters might have Story Arcs, while everyone else seems to lack any motivation whatsoever or is caught in an infinite loop.

If left unchecked, expect fans to complain how They Wasted a Perfectly Good Plot, let the less fantastic characters fall behind, never did anything with Hufflepuff House, and Jossed everyone's ships.

Most commonly happens to The Hero, The Lancer, or the Ensemble Darkhorse.

This trope is closely related to the Creator's Pet and the Replacement Scrappy. The main difference is that the SSS is not necessarily hated (at least, not at first), in fact, they may be one of the most popular characters, but they get too much attention, and eventually fans get tired of the overexposure. Compare Wolverine Publicity, and contrast Out of Focus. If the fanbase agrees (or the marketing team does, at any rate), may lead to a Spotlight-Stealing Title. In Fan Fiction circles, Mary Sues often steal the spotlight out of nowhere. May become a Breakout Character if they are adored by the audience. See also Adored by the Network, for spotlight-stealing shows.

A friendly reminder that Tropes Are Not Bad - there are times where the viewers actually like the spotlight hog!

Examples of Spotlight-Stealing Squad include:

As a group, the Main Event Mafia in particular, Kurt Angle specifically. Worst of all, it's basically a rehash of the nWo storyline from WCW, complete with Big Poochie.

And Hulk Hogan's now doing it again to TNA—again.

Retrieved from "https://allthetropes.org/w/index.php?title=Spotlight-Stealing_Squad&oldid=1937360"
Categories:
Cookies help us deliver our services. By using our services, you agree to our use of cookies.