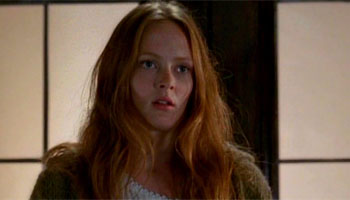 Lilah sneaks into Lindsey's office to rifle through some of his paperwork. Darla slithers out from the shadows, startling her; luckily, Darla isn't interested in Wofram & Hart's "worker bees" and their continual back stabbings. Darla opens her hand to reveal a purple powder, which Lilah recognizes as Calynthia powder. She wonders if this is how Darla keeps Angel sleeping. Darla is apparently drugging Angel with Calynthia powder, keeping him asleep while she...does whatever she does.

Angel wakes up in the middle of the night, and enters the lobby of the Hotel. Cordy and Wesley are arguing, by insulting each other and calling each other names. Angel asks what is the argument about, and they reveal they were arguing over whether Gunn should be paid or not. Angel's disturbed sleep patterns are under scrutiny by Wesley. Just then, Cordy has a vision of a girl in trouble in an alley on Hollywood and Wilcox. Angel runs out the door, but Cordy says he's going to be too late. Meanwhile, the girl in question runs into an alley, followed by two men. She falls and one guy takes out a knife. The girl is sobbing as a dumpster physically slams into the two men, crushing them against the wall. Ker-splat.

Angel arrives at the crime scene, but the police and an ambulance are there as well. He pretends to be the detective on call and pumps an officer for information. The trail of blood leads Angel into a nearby building, where a frightened girl is still hiding. She warns him to stay away from her because she is very upset. He walks closer, and is impaled by a flying piece of rebar. The girl starts to flee, but stops when Angel calls her again. He stands up and yanks the rebar out. Jinkies! Angel points out that he's "different from most people", just like her. He offers her his card. The girl takes the card and quickly runs off. After she's gone, Angel collapses, and mumbles: "Okay, maybe she can hurt me a little." Bethany walks up to an apartment door, but before she can unlock it, Lilah opens it, saying she was worried. Apparently, Lilah is letting her stay at her place. Something's afoot...

Bethany is in bed sleeping, while Lilah steps in to spy on her new lab rat. Bethany is dreaming about her father. He grasps her hand and leads her down as items begin to shake in the attic. Lilah watches Bethany sleep, while she telekinetically rocks objects on her dresser. The objects shake more, and Lilah smiles, until a lamp flies off the dresser and clocks Lilah in the head. Bethany wakes up, realizes what she's done, and flees, despite Lilah's protests. Surprising all present, a tear-stained Bethany walks through the door and introduces herself: Bethany Chaulk.

At Wolfram & Hart, Lilah is being reprimanded by Holland Manners on losing Bethany. It is revealed that Lilah sent those two men after Bethany the previous night, and that Lilah wants to hone Bethany into a bone fide assassin. Holland expresses doubt that Lilah's up to the task, since Bethany is closer to being a Molotov than a laser. Lilah pledges to find her, right before her phone rings: It's Bethany. With a triumphant look, Lilah winks at Holland and asks Bethany where she is right now. The Hyperion Hotel. D'oh.

Bethany is explaining what it's like to have her power. Angel sits next to her on a bench. She says she doesn't know how to control it and calls it a disease. Angel is trying to help her but he's too close and she's getting uncomfortable and nervous. Wes steps into the foyer and points out that they shouldn't be wasting their time on someone who doesn't want their help, and suggests she go back to her father's. Bethany gets mad and throws Wesley into a wall, and Angel out into the sunlight. Angel scrambles back into the shadows, smoking slightly. Bethany realizes what she has just done.

Cordy puts a towel with ice on Wesley's back and gets after him for not listening to his own advice. He points out that now they know the cause of Bethany’s powers. Wes explains that this kind of power comes about after an abusive experience. Angel finds Bethany in the top floor of the hotel. Bethany is embarrassed, and is hiding. Angel explains that not all people are bad.

Angel is again having the dream with Darla, when he was Angelius, and snacking on the gypsy girl. Bethany is walking around, and eventually finds her way into Angel's bedroom. Bethany offers to make Angel happy, but shouts at him when he touches her. Angel asks Bethany to let him get some sleep, and she leaves. We see Darla hiding, watching Angel from around a corner.

Wolfram & Hart. Lilah is having another chat with Holland. He says Bethany needs to leave the Angel Investigations, Inc. head quarters soon. She is keeping Angel from sleeping, which means that Lyndsey's plan is getting botched. Lilah gets the message loud and clear.

Angel and Gunn break into one of Bethany's attacker’s apartments. Angel stands outside, since he is not invited in by the owner, while Gunn looks around. Gunn explains that Bethany’s attacker was an expensive muscle-for-hire. Angel hits redial on the speaker-phone, and is greeted by a receptionist of W&H.

Cordy and Bethany are walking through a carnival, drinking lattes. Cordy cuts to the chase: "Don't bone my boss." Bethany acts innocent and denies any of her emotions. Cordy explains that she fears for herself and her friends. She says she understands how Bethany felt, because she saw her in a vision. Bethany finally accepts Cordy as a friend and assures her she won't "bone" Angel. They begin to continue walking when a man walks by and injects something into Bethany's neck. She begins to get sleepy and two other men try to kidnap her. Cordy acts quickly by throwing the hot lattes into the men's faces. The van drives away, just as Angel and Gunn arrive in Angel's convertible. Cordy points out the fleeing van, and Angel chases after it. Angel tries to get in front of the van, but fails. Gunn takes the wheel as Angel jumps onto the front of his car, then the back of the van. Angel grabs out Bethany's kidnappers and tosses them off the van.

Lilah is angry that Angel rescued Bethany, and tells a person on her phone to let Angel play with time-bomb Bethany. Lilah instructs them to "pull the trigger."

Bethany makes her way to the top floor, as Angel explains that Lilah Morgan is evil. Bethany believes that Lilah is her friend, and Bethany starts to lose control over her powers. Bethany makes to leave, when the door opens, and her father is standing there. Bethany's father greets her as rabbit. Bethany blows her stack, shattering all the windows, and the hotel shakes for a second or two. She opens the door to leave, and sees her father standing in front of her. Bethany's power is triggered, but this time, all of the windows of the floor explode.

Her father walks in, trying to convince her to come back home with him. The plaster is falling and the walls are rattling. Cordy's arm gets stabbed with a nail and Angel is thrown against the wall. Angel gets up and calls out Bethany's name, urging her to control her powers. She hangs her father in mid-air, choking him. He flies out the window, but she stops his fall a few feet before the cement sidewalk and then lets him safely fall to the ground. Bethany's battle is over.

In Lilah's apartment, Bethany is packing up her things, while Lilah tries to convince Bethany to stay. Bethany tells Lilah not to look for her. Lilah reveals that Angel is a vampire. Angel tells Lilah to find somebody else's brain to play with. Lilah tells Angel that they have someone else in mind, then slams her door.

"The poor man can't even afford a real axe!"

Lilah: One more excuse from you and I am gonna bury you alive next to my house so I can hear you screaming.

Gunn: "Thought I might get the chance to stick it in something now."
Cordy: "Men are all alike."

Bethany: "'Make love'? What are you -- from the eighteenth century?"

Bethany: "It looked like a pretty happy dream - or maybe the covers were just rumpled."

Coredlia: At least I'm not a sheep like you.
Wesley: I am not a sheep!
Coredlia: You're such a sheep! You've never had an opinion that you didn't read in a book.
Wesley: At least I've opened a book.
Coredlia: Oh, don't even try with the snooty, woolly-boy! I was top 10% of my class!
Wesley: What class? Advanced Bosoms?

Gunn: "Knock, knock. See, this works great. You break and I enter."