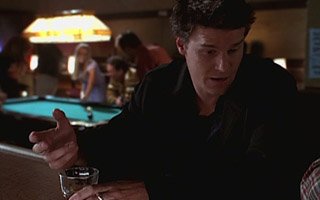 Our hero, ladies and gentlemen.

Having left Sunnydale and his true love behind, we pick up with our hero where we previously left off: a depressed, lonely Angel getting hammered in a bar. After saving some pool-playing women from their dates (who turn out to be vampires, natch), a sullen Angel returns to his underground lair beneath an office complex. A man appears behind him, complimenting the "batcave" decorum. This fellow is Doyle, a magical Irishman sent by the Powers That Be. Doyle's here to enlist Angel in the good fight. Angel retorts that he's got it covered. Doyle warns that Angel is so cut off from humanity that his demon-slaying will only lead to apathy towards people. Furthermore, unless Angel does something to remedy this, he'll start to prey on humans again. Doyle hands Angel a note regarding his latest vision, that of a waitress in imminent peril. Angel agrees to look into it.

Angel follows the address to a coffee shop, where he strikes up an awkward conversation with the lady in question, a struggling actress named Tina. She agrees to meet him after work. Outside the shop, however, Tina waves around a can of mace, accusing Angel of working for a guy named Russell. Angel manages to defuse Tina and kindly offers her a ride. Tina, now embarrassed, is headed to a star-studded party and invites Angel along.

At the party, Angel skulks through the crowd and spots Cordelia Chase as she mingles with some execs. They talk about old times, and Cordelia announces that she moved to L.A. to pursue acting. She tactlessly excuses herself, explaining that she's busy "talking to people that are somebody." A bit deflated, Angel moves on and notices Tina arguing with a man. She and Angel take the elevator down, and are jumped by "Russel's" hired muscle. Angel fights them off and decides it's wise to stash Tina at his place.

Things go awry when Tina sees the slip of paper on which Doyle wrote her name. She flees upstairs, and when Angel tries to intervene, his hand bursts into flame from a ray of sunlight and he vamps out. Tina wails and runs outside, while Angel can only watch. Tina races to her apartment and starts packing, but Russell is lying in wait. He's interested to know who was with her last night. When Tina describes what happened to Angel's face, Russel vamps out (aha.) and drains her. Angel arrives too late and discovers Tina's body.

Cordy's contact from the party calls to reports that Russell Winters is very interested in furthering her career. Cordelia is escorted via limo and seems very happy with herself. Angel packs a bag of weapons and prepares to go medieval on Russell. Cordelia is at Russell's for only a few minutes before she realizes that he is a vampire. Russell feebly denies this, then shrugs and vamps out. Angel arrives just in time, and he and Cordy flee into the night.

At Russell Winters Enterprises™, Angel barges through the doors, only to be intercepted by the lawyer, Lindsey MacDonald. Lindsey is well aware that Angel's a vampire, and warns him not to meddle with his client. Russell offers to make peace with Angel, but Angel kicks his swivel chair out a window. Russell bursts into flame and combusts before he hits the pavement.

Angel returns to the office to find Cordelia setting up shop. Doyle took it upon himself to offer her a secretary position. Doyle tells Angel that there's still a lot of people in the naked city who need help. He intones, "Are you game?" We cut to a view of Angel standing on a skyscraper, watching over the city. In a voice-over, we hear his reply: