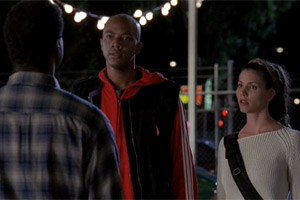 Angel is in the karaoke bar talking to The Host. The Host is impressed with Angel’s performance and tells Angel that he really put his in heart into his singing. He begins to sing a ballad and Angel wanders out to the dance floor where Darla waits for him. Darla wants to know if Angel has told anyone else about their "dates." He responds that he hasn’t. He wanted to keep her all to himself. They begin to kiss...and Angel wakes up alone in his bed. It was just a dream.

Gunn arrives at the offices to meet Angel and discovers that Angel is still asleep. Gunn is tightly wound. A demon named Deevak has put several of his men in the hospital. Cordelia offers Gunn her and Wesley’s help, at which he scoffs. Their conversation is interrupted by David Nabbit's arrival. He's just returned from a hostile takeover in Kuala Lumpur and is responding to Angel's page. Time to throw down with some demons, awww yeah! Angel comes down the stairs and asks David for advice on how to purchase the hotel without a down payment. Slightly deflated, David agrees to have his money people work up some numbers for Angel.

After David leaves, Angel and the others prepare to leave. Gunn is unhappy with the idea of taking Cordy and Wes along but Angel is insistent that they need the entire team working on this. When they arrive to meet the snitch, Jameel, that has the information on Deevak, Jameel is not cooperating. He's afraid he's been followed. He's right.

A group of vampires storm into the garage. The others fight him but they seem to have trouble with the vamps. They finally manage to dust the bad guys, but not without getting pretty banged up in the process. Wesley remarks that Angel seems off his game. They agree to go back and regroup. Gunn is furious that they're not ready to go up against Deevak and leaves. Cordy drops Angel off at the hotel and mentions how he seems to be sleeping a lot. He just glares at her and she takes his car home with her.

When she gets home, she sits down to read a book and is hit with a powerful vision involving Gunn. She tries to call Angel but he isn't answering his phone. He’s in the midst of another dream about Darla. Cordelia, unable to reach anyone, leaves a message for Wesley and heads out to save Gunn herself.Cordy drives Angel's car to Gunn's place. Cordy peeks into the room and sees Gunn practicing his fighting skills with Joey, a member of his crew. Cordy thinks Gunn is in danger and her ax aims true - on Joey's head.

Angel is still dreaming. Darla tells him that the others will try to separate the two of them. Angel hears a pounding and turns to find Wesley nailing a coffin shut. He attacks Wesley and wakes up to find himself attacking Wesley. Once he's no longer in danger of being choked to death, Wesley explains the situation. Angel gets dressed and the two of them hop on Wesley's motorcycle to go find the others.

Cordy is bandaging Joey's head. Gunn is kind of embarrassed that a girl tried to "save" him in front of his crew. He insists the he can take care of himself. Gunn walks Cordy out and tells her that he doesn't need or want her help. Outside, they stand before an empty parking space and Gunn looks around. He asks, "So, where's your car?" D'oh.

Gunn and Cordy arrive at the used-car dealership. Henry, who runs the garage chop shop in the back, informs Gunn that the only guy in the neighborhood who would steal a 1967 Plymouth convertible is Desmond, who's at Tito's party. Gunn spots a few familiar cars from the neighborhood. He warns Henry to stop stealing local cars or else he'll put them out of business. And not by opening his own stolen car business and beating his prices, either! Gunn and Cordy head to the party. Deevak comes out from behind Henry and threatens Gunn's life. Just as they’re leaving, Deevak appears. The man at the chop shop was working for Deevak and sent them to the party as a trap.

At the party, Gunn tells her to keep close. Cordy assures him she can blend, but this isn't Cordy's kind of party and so she stands out like a sore thumb. They walk through the house looking for Desmond, and spot him pouring himself a beer. Gunn demands the return of the car, but Deevak's vamps come in and attack Gunn. In the melee, one of Gunn's friends, Veronica, is injured. Cordelia springs into action trying to stop the blood flow and they rush her to the hospital. Gunn is furious with himself for getting his friend injured. He mistakenly refers to Veronica as Alonna - his sister who was turned last spring and dusted at Gunn's hand. Gunn punches the wall in his anger. Cordy can only try to comfort him and tell him it wasn't his fault. Just then, Desmond, who also got hurt, is about to leave on the elevator, when Cordy stops him, demanding to know where the car is.

Angel and Wes arrive at the crashed party, but there's only an ambulance and a couple stragglers heading back home. One of the partygoers, a young girl, walks out disoriented. Wes and Angel interview her about what happened, but she clams up. Behind the ambulance, Angel offers the girl a consoling smile and headbutts her, causing her to turn vamp-face! "Start talking."

When Gunn and Cordelia finally arrive at the garage where Angel's car is stashed, Deevak is there. He grabs Gunn by the throat. Cordy tries to help but is easily overpowered. Deevak morphs into his human form...Jameel, the snitch. Cordy pulls some mace from her purse and squirts some in his eyes. Deevak releases Gunn and switches back to demon form just as Angel and Wes enter the garage. They battle with Deevak’s men, and Angel is finally able to embed an axe into Deevak’s skull to kill him.

Afterwards, Cordelia tells Gunn that the danger in her vision wasn't from Deevak. It was from Gunn himself. He's on a self-destruct mission and Cordy warns him that she’s going to hang around until he can find some peace. She reminds him that he never thanked her. They just exchange a smile and Gunn leaves.

Angel returns home to the hotel...and Darla. She comforts him and tells him how wonderful she is. As she begins to seduce him, we see a smiling Angel lying in bed. It’s just another dream. -- Or is it? We see a hand and then we realize that Darla is in bed with Angel while he lies in unconscious bliss. Gah!