Angel/Recap/S02/E08 The Shroud of Rahmon 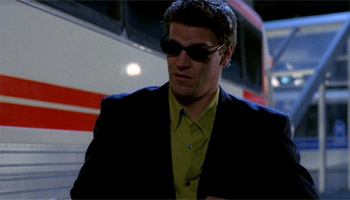 Wesley is being interrogated by detectives about a robbery. We flash back to Angel talking with Gunn about a planned museum heist of some supernatural artifact. The group is bringing in a vampire from Vegas named Jay-Don. Angel tells Gunn that he is taking over the case because it is too dangerous. Angel meets Jay-Don at the bus station, acts like a moronic fan, and stakes him. Another demon named Menlow shows up looking for Jay-Don. Angel assumes the role of Jay-Don and behaves like an ass. Menlow and Angel meet up with the rest of the crew, which includes a human security guard, Bob, and some ugly demon. Gunn then shows up in his cousin's place. Menlow explains that they are going to steal the Shroud of Rahmon, an item worth 2 million on the black market. Meanwhile, a picture of Angel with Menlo somehow turns up at the police station. A cop shows it to Kate and tips her off to their operation.

Wesley finds out in a book that the shroud drives people insane. Wesley and Cordelia decide to go warn Angel at the museum in case the heist was taking place tonight. Wesley and Cordelia show up and start feeling weird as soon as they walk into the museum. Meanwhile, all of the thieves begin losing their minds, arguing over the big crate holding the shroud. Gunn challenges Angel and they fight, breaking the crate in the process. This releases some purple kind of gas from the crate. Wesley shows up and tries to remember the message to tell Angel. Kate shows up and points a gun at Angel. Angel manages to talk his way close to her. He grabs her, bites her, and then drops her to the floor, apparently leaving her dead. A SWAT team arrives at the scene. They find Wesley kneeling over Kate's body, and he is dragged away.

The crew makes it back to the hideout with the shroud. They take the shroud out of the crate and start to fight over it. The big demon gets shot in the head and Angel and Gunn fight over the shroud. Angel, in a moment of clarity, convinces Gunn to let him have it. He takes it outside and burns it.

Back in the present time, Wesley finishes telling his tale to the police who do not believe him. They start to arrest him when Kate shows up and makes them let him go. Kate is seen looking out of the window with a big bite mark on her neck. She thinks back to when Angel was biting her. It turns out that he had leaned close to her and whispered, "stay down or they'll kill you." Wesley and Cordelia are back at the office. They discuss their concerns about the possibility that since Angel drank human blood from a living person that his bloodlust may have been reawakened.