Everything About Fiction You Never Wanted to Know.
< Angel‎ | Recap‎ | S05
Jump to navigation Jump to search 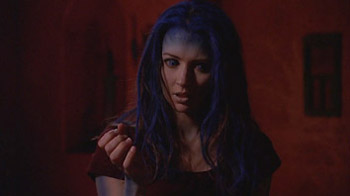 In Wolfram & Hart's science lab, Knox oversees the delivery of a sarcophagus; when Fred touches one of the crystals that cover the lid, a puff of dusty air is released, making her cough. As Fred meets Wesley downstairs, she coughs up blood and collapses; after she regains consciousness in the medical wing, her friends assure her that she'll be okay, even though they don't know what's wrong with her.

The group rushes to the lobby, where Angel admits some sort of parasite is slowly killing Fred. Angel, Spike, and Lorne go to Lindsey's apartment, where they encounter Eve, who says she knows nothing about what's happening to Fred and hasn't heard from Lindsey. Eve sings a little of "L.A. Song" to Lorne, who determines she's not involved. As the guys leave, Eve says there's no info on the sarcophagus in the firm's records, and the only thing not in the firm's records are records on the most ancient demons, known as the Old Ones.

When the group returns to Wolfram & Hart, Wesley tells them the demon in question is Illyria, "a great monarch and warrior of the demon age" who was buried in the Deeper Well, the burial ground for the remaining Old Ones. Fred is being "hollowed out" so Illyria can use her to return to the world. Angel and Spike go to the Deeper Well to speak with its keeper, Drogyn; as the duo heads into the Well, Angel tells Spike to avoid asking Drogyn questions, as Drogyn cannot lie.

As Gunn tries to find a way to save Fred -- and discover who was responsible for the sarcophagus' arrival in the first place -- Knox suggests freezing Fred in the cryogenics lab until they figure out how to stop what's killing her. When his tests don't work out, Knox tells Gunn, "I don't just care about Fred -- I practically worship it." Gunn catches the slip of the tongue and accuses Knox of causing what's happening to Fred. Knox admits he is one of Illyria's acolytes -- then tells Gunn how the sarcophagus arrived at Wolfram & Hart: Gunn signed for it to receive a boost to his enhanced mental abilities, which had begun to deteriorate since he joined up with Wolfram & Hart.

As Angel and Spike explore the Deeper Well, Drogyn says Illyria's essence can be drawn out of Fred by returning the sarcophagus to the Well -- but Illyria's essence will leave Fred and kill every person between Los Angeles and the Deeper Well if this is done. Angel and Spike realize they can't allow even a single death to occur, much less thousands, to save Fred. All hope to save Fred is lost.

In her apartment, Fred asks Wesley if he would have loved her; he says he's always loved her, even before he knew her. She asks him to tell her parents she wasn't scared; as he begins to weep, Fred's eyes turn blue, then her body twitches and sends Wesley across the room, where he watches her skin and hair turn blue. Illyria has taken over Fred for good; after her rebirth, she says only one thing: