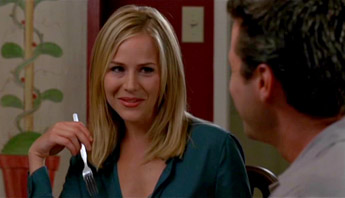 Angel is still drowsy and seeing Darla -- this time in waking dreams. Cordelia is hit with a vision about a Thrall Demon residing in a water tank. They ring up Gunn, and the four of them head over to the location to slay the demon and its followers. During the battle, Angel gets a bit of tunnel vision and ignores Gunn's plea for help in favor of brutally hammering on one mook in particular. The others seemed concerned about him afterwards. He's off his game. Angel decides to go for a walk to clear his head. He ends up on Third Street Promenade in Santa Monica (Yes, it was a long walk.) As he makes his way through the leisurely crowd, he spots a familiar face: Darla. Stunned, he tries to catch up to her but loses her in the crowd.

London, 1860 -- England, 19th century. Darla and tells Angelus that she's prepared a surprise for him - a trio of sisters wandering down the avenue. The middle daughter has powers of vision. The young girl turns, and it's Drusilla. Angelus is ready to pounce on her right now, but Darla tells him to "let the plum ripen." Angelus realizes he has to come up with something elaborate for this one.

Angel returns to the office and tells Cordelia and Wesley about seeing Darla but they don't believe him. Darla was staked three and a half years ago. They have more important matters to discuss anyway. A new client who believes that his philandering wife's reports of being "abducted by aliens" may, in fact, be less than credible. The Bat Pack track the wife to a hotel where, sure enough, she's making an illicit love connection. Angel spots Darla in the lobby. He races over and grabs her but she claims to be someone named DeEtta Kramer. Security comes to aid and she races outside to her husband...in the sunlight. Yep, she's human.

Undeterred, Angel heads over to a San Fernando suburb to pay the Kramers a visit. Creeping through their yard, Angel glaces into a window that looks into a beautiful scene of Stephen and Darla sharing dinner. Stephen's a paid actor, and annoying the hell out of Darla, who is communicating with Lindsey via earpiece.

London, 1860 – Angelus is at the Sisters of Mercy convent, having just killed the entire convent. Darla notices a very much alive Drusilla in the corner, who is now in full-fledged wacky mode. Darla wonders why they don't kill her already. The lightbulb has finally gone off over Angelus' head. He'll make her a vampire, instead.

Darla calls 911 and pretends that an intruder is in the house. The vamp guard backhands Darla and murders Stephen. Angel overhears the screams and crashes through the door to find Darla sobbing over her dead "husband." Angel runs from the police, taking a few bullets in the process, and runs off. Kate arrives on the scene and Darla plays the grieving housewife. The moment that Kate turns her back, Angel's hand descends from the nearby tree, grabbing Darla and pulling her up. Yoink!

Angel drags Darla back to the water tank. After a little foreplay, her game of being DeEtta is tossed aside. Darla wants the old Angel back, but he tells her things are a little different now because she is now has a soul. Darla presents Angel with a cross and slams it against his chest, causing it to smoke. She taunts Angel about how it's proof that no matter what he does, God doesn't want him -- But she still does. Succumbing to his cooking flesh, Angel releases Darla and can only watch as she walks out into the sunlight. Later, back at the hotel, Cordy and Wes pay Angel a visit in his room. They're worried. He reassures him that he didn't go bad. Wesley warns him to be careful. With Darla conspiring with Wolfram & Hart, there's bound to be trouble.