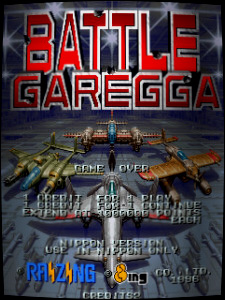 Battle Garegga is a vertically scrolling Shoot'Em Up arcade game released by 8ing/Raizing in 1996, and then later ported to the Sega Saturn in Japan.

Mathew Wayne, a great mechanical engineer, lived in a small country town where he owned a small automobile factory. His young sons Brian and Jason were influenced by his work. The sons were taught by his father every trick of the trade of becoming a mechanical engineer as great as he was. A few years later, as their father retired, Brian and Jason took over the operation of the factory. As years rolled by, words of their vehicle designs and high technical capabilities passed from one town to another until it reached the ears of the federal government. After talks with the managers of the federal weapons development, the Wayne brothers accepted a large contract to develop a new line of military vehicles and weapons for them. Their creations were years ahead of anything else like them in the world.

One morning, the sky turned dark by the oncoming fleet of planes, and the echoes can be heard from a far distance. The weapons and the vehicles that the Wayne brothers originally developed for the federation destroyed every town and city in their way... including their own. Seeing that their weapons had enabled the federation to expand through conquest and had claimed many victims in the process, Brian and Jason complete four powerful prototype planes whose designs they never submitted and set off to destroy the weapons they helped create.

Battle Garegga is perhaps one of the more controversial Shoot Em Ups. It is well-known for its Dynamic Difficulty, which demands some unconventional tactics (such as dying on purpose) to keep lowered enough that the game remains completable. Another source of debate is the graphics; the graphics are very brown and gray with low contrast, right down to the bullet colors moreso than most other graphically traditional shooters. However, amongst those who dedicate themselves to this game, Battle Garegga is a very rewarding shooter, with many, many secrets and tricks and plenty of challenge to go around.

Tropes used in Battle Garegga include:

Be careful about editing this page a lot, you might raise the rank.