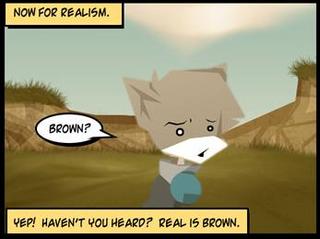 Desaturating or heavily tinting a game a single color for the sake of realism, usually to a sepia effect (hence the trope name), but sometimes blue or pure grey.

Giving a game a narrow color palette can make it look gritty, dramatic and "realistic" and stand out from similar titles. Done well enough, a game and its color scheme will always be associated with each other. In practice, this means a world of brown, grey and the occasional red from the blood splatter on the camera.

It's also used to cover up a problem with lighting and shading in modern games, which usually have a very primitive system of real-time lighting - a light shines down and hits an object, and that object casts a shadow. But light also bounces around after hitting an object, in a process known as interreflection. This is very difficult for a computer to simulate and scenes with many bright or colorful objects will look fake without it. Until very recently, the only solution was to "bake" the lighting on a more powerful system. But this means nearly everything has to be static - you can't move scenery around, or else the values would need to be recalculated, which means the game can't have, say, destructible terrain, a day/night system or a snazzy physics engine (This may be one of the reasons why Crysis has such high system requirements, as it tries to do both things at the same time). Again, if everything is tinted one dull color, it's not as noticeable.

Unfortunately, at a certain point your players will take a look outside their window and back at your game, and something will seem wrong. Why are those palm trees brownish green, even though you're supposedly on a tropical island? Brown may be realistic for some surfaces, but not for all of them, and everything is best taken in moderation, otherwise you'll end up with a game that's Deliberately Monochrome.

It's becoming increasingly common for colorful games to mockingly parody this trope, usually by including an optional "next-gen" filter, tinting the whole game brown. This could make Real Is Brown on the way to becoming an Undead Horse Trope.

See also Mood Lighting, Color Wash. The use of Post Processing Video Effects makes Real even Browner. See also the sister trope Who Forgot the Lights?, which deals with a shortage of light in general. This trope is usually when Color Contrast is deliberately avoided.

NOTE: This trope does not apply to a game taking place in an environment that actually would be gray or brownish in Real Life, like a lot of deserts. Unless they're just set in a desaturated environment to make their lack of color look like a deliberate design choice.

Examples of Real Is Brown include:

Retrieved from "https://allthetropes.org/w/index.php?title=Real_Is_Brown&oldid=1835350"
Categories:
Cookies help us deliver our services. By using our services, you agree to our use of cookies.