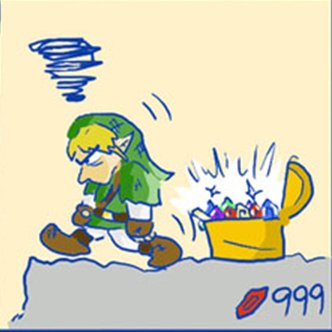 At least now the Rupees max out at 9999 these days.

No, not the stylish headgear favored by baseball players nor the dashing nazi-buster. Nor the shorthand for "capture". A "cap" is the maximum number of instances of something a game's engine can process. Once you've hit the cap for that thing, any other factors which would increase it beyond the cap may as well not have happened.

This has a variety of uses in game design, but the gamer is concerned with caps in only a handful of instances:

There are three kinds of caps:

Games are sometimes not even programmed to cap such counters when they should. They will dutifully add one to a value that can't properly go any higher, resulting in an "overflow" malfunction. This is especially common with old games, because putting in a test for a maximum value would use memory and CPU cycles they didn't have to spare. An overflow might manifest as:

In gaming, 'cap' as a verb can also be short for 'capture'. But that's not important right now.

Not to be confused with a certain hero from World War II who's still around thanks to a good icing.

Examples of Cap include:

Retrieved from "https://allthetropes.org/w/index.php?title=Cap&oldid=1937069"
Categories:
Cookies help us deliver our services. By using our services, you agree to our use of cookies.