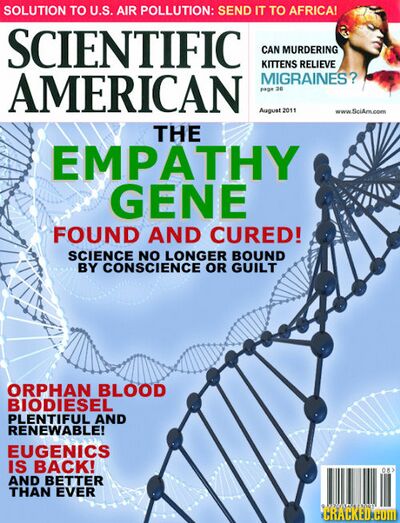 Writers are not scientists.[1] Whether it is because they perceive science as cold and emotionless, or because they just disliked science and embraced literature after failing math in high school, luddism is an awfully common philosophy in the arts community. The typical theme is that some sort of advanced scientific research has Gone Horribly Wrong, creating a monster, causing an impending natural disaster and/or a massive government cover-up. The heroes typically discover the side-effects of the research and investigate, discover what's going on, and try to stop it.

The antagonist (almost always either corporate or military/government scientists—and not hot) refuses to believe that his work could be so badly flawed and/or immoral, or simply doesn't care about who gets hurt by it, insisting that the research is For Science! They will generally use their influence with the government to make life difficult for the heroes; this can include trying to have them arrested and/or otherwise silenced, often leading to a shoot-out, jail break, or Chase Scene.

In the end, the scientist will be destroyed by his own creation, the heroes will be proven right, and through their efforts the world will be saved from the horror of science. Sometimes the theme is softened by the presence of The Professor among the heroes who represents a more reasonable take on the science involved.

This can often come off as a bit hypocritical, particularly when dealing with speculative fiction, as you get an Anvilicious message of "everything we have so far is good, but we should stop now."

Nearly every Robot War story is based off of this (except the ones where everything was all right, until humanity screwed it up by being jerks to the nice robots). There are a few popular current fields as well, like cloning, genetic engineering, and surveillance.

For obvious reasons, this is played down in series starring a Science Hero, heroic android, or Robot Buddy, such as in some anime. It's more likely that there will be a (still obvious) distinction between good and bad scientists. This is usually played up if the heroes are Phlebotinum Rebels, though.

Note that not every work with a Mad Scientist or a threat borne of science falls under this; it's only the case where Messing With Things You Ought Not To is blamed for the problems.

The trope rarely makes a distinction between pure science and applied technology.

Frequently overlaps with Green Aesop. May be paired with Industrialized Evil.

Compare and contrast Cyberpunk, where the rebel hero goes up against The Man who maintains control through technology; Post Cyber Punk tends to embrace new technology less critically. Typically, you will find there is No Transhumanism Allowed. See also Harsher in Hindsight and Seinfeld Is Unfunny for when a world meant to be portrayed as a Dystopia Twenty Minutes Into the Future bears a curious resemblance to present day technological advancements that are taken for granted by the audience.

If the writer is sincere in their belief that Technology Is Evil, they may thrust the characters into a situation (Closed Circle, After the End, etc.) where they must survive without (most of) the technology, and take the good with the bad; compare Space Amish. The inverse of this is a Cozy Catastrophe, where the heroes are able to get General Motors, police and hair salons up and running again only a few months after America Wins the War, with similarly unfortunate implications on the opposite end of the spectrum, implying that the writer believes in the Status Quo. Zeerust can have a similar effect if an otherwise futuristic (or even "dystopian") technocratic society bears a curious resemblance to when it was written and problems the society was experiencing at the time.

Any time this trope shows up, you are very likely to find Romanticism Versus Enlightenment in its wake (and the work will be taking the Romanticist side). Related tropes include the Mad Scientist, Engineer Exploited For Evil, The Evil Army, Government Conspiracy, Corrupt Corporate Executive, Government As Villain, Mr. Exposition, Technical Pacifist, and Well-Intentioned Extremist. The protagonist is often assisted by an Anti-Hero who used to work for the Mad Scientist, and frequently has to deal with a Pointy-Haired Boss. See also Science Is Wrong. Polar opposite of most stories with a Science Hero.

See also the Scale of Scientific Sins as well as Ambition Is Evil. Not to be confused with Do Not Try This At Home when Science is Dangerous, cause yeah, sometimes it is.

Examples of Science Is Bad include:

The monster verges on raising the radiation levels of the entire planet beyond what life could survive. It also questions whether the doctor's sacrifice was actually heroic as the Oxygen Destroyer was, compared to other methods, less likely to destroy cities or attempt to exterminate the human race.

He later has to admit that he was wrong—when, in the future, he sees the Moon shattered into little pieces by atomic bombs. Earlier, when the protagonist returned to the past to try and save his girlfriend, she was killed by a malfunctioning automobile (just as the protagonist stopped being fascinated with it because it was "just a machine," and not worth taking his attention off of his love).

In the distant future, the Eloi are peaceful, good people with very primitive technology; the evil, ugly Morlocks have an industrial society Beneath the Earth. They also have a Big Bad with a giant brain who is especially good at engineering, and at being evil.

And in the climax of the movie, the protagonist destroys the industrial Morlocks—by blowing up his machine in their lair (commenting on its loss with, again, "it's just a machine"). The only positive portrayal science or technology get in the film is with the generally helpful holographic librarian (who somehow survives hundreds of thousands of years and is shown reading books to children at the end). But his main function is to keep memories of the past (and, presumably, its follies) alive, not to represent, or aid, progress.

Turns out the genetics lab induced human hibernation on the victim, which the victim was involved in voluntarily and by accident the vic took too much of the mixture they created too fast. He ran out choking and collapsed. They stole him from the van thinking he was alive, thought he was dead when they couldn't revive him and dumped him before they got in more trouble for their unethical experiments. When confronted by this news the head scientist can only remark about his delight that it worked and lists off all the benefits like prolonged space travel and how he will be famous.

The second suspect tries to tell the cops how putting them away will "shut the door on the future" as no one else knows the formula but them, but to the cops the complicated issue is simple, they committed attempted murder (even though they thought the guy was already dead) and are going to jail. It's not "robot apocalypse" or "mutant monster" worthy, but it still denotes the same thing: science is weird... and bad.

Retrieved from "https://allthetropes.org/w/index.php?title=Science_Is_Bad&oldid=1924701"
Categories:
Cookies help us deliver our services. By using our services, you agree to our use of cookies.