Everything About Fiction You Never Wanted to Know.
(Redirected from Bill O Reilly)
Jump to navigation Jump to search 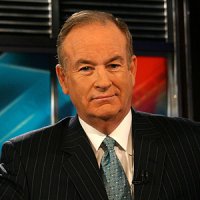 The O'Reilly Factor was a political news and talk show. It's was around for the first 20 years of the channels existence, from 1996 to 2016, and host Bill O'Reilly has been referred to as the face of Fox News. It consistently topped the ratings as the most watched cable news show, and its popularity means it's one of the most parodied as well. Its original title was The O'Reilly Report, which should sound familiar.

O'Reilly has also written several books, some of them tie-ins to the show, some of them not. There used to be a radio show called The Radio Factor, but that died in early 2009.

As with all Political Programmes please observe the Rule of Cautious Editing Judgement when adding examples to this page.

Tropes used in The O'Reilly Factor include:
Retrieved from "https://allthetropes.org/w/index.php?title=The_O%27Reilly_Factor&oldid=1681787"
Categories:
Cookies help us deliver our services. By using our services, you agree to our use of cookies.