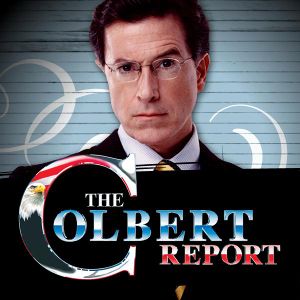 The Colbert Report (pronounced Col-bear Re-pore) was the Emmy award winning (Best Writing - Variety, 2008 and 2010) Spin-Off from The Daily Show, featuring the screen persona of news anchor Stephen Colbert. Broadcast on Comedy Central between 2005 and 2014, it operated as a parody of news talk programs such as The O'Reilly Factor (when the show was pitched as "Stephen Colbert parodying Bill O'Reilly", it was picked up immediately without even a pilot).

The character of Colbert himself could be best described as a Strawman Political of a news pundit, a mega-conservative who embodies all the stereotypes about conservative people in one convenient shell. Much like its progenitor, it read the real news in a humorous tone. It also coined the words "truthiness" and "wikiality". The latter one is a portmanteau of Wikipedia and reality: basically the practice of Rewriting Reality by bringing democracy to information. "If enough people agree on it, it becomes true" -- the example given being Colbert's assertion that elephant populations had tripled since 31 January 2006. [1]

Differed from its mother show in that it was a kind of Sitcom with guest stars playing themselves and a funny premise. Whereas The Daily Show is mainly Jon Stewart reading the news and making funny observations, The Colbert Report revolved around a character and his interaction with the real world. There were recurring characters and plot points (such as Colbert's broken wrist). Indeed, during the show's first year of existence, Colbert even had a fictional "archenemy" in the form of fellow comedian David Cross, who played fictional liberal talking head "Russ Lieber" before the character was written out of the series.

It should probably be noted (or perhaps not) that Stephen Colbert, the fake news anchor, was, in fact, a character that Stephen Colbert, professional comedian, was playing. He does not believe the views he espoused on the show (for the most part), and has referred to the character as "a well-meaning, poorly informed, high-status idiot."

In 2014, The Colbert Report ended its run so that Stephen Colbert could take over the helm of The Late Show as David Letterman's successor.

Retrieved from "https://allthetropes.org/w/index.php?title=The_Colbert_Report&oldid=1914206"
Categories:
Cookies help us deliver our services. By using our services, you agree to our use of cookies.