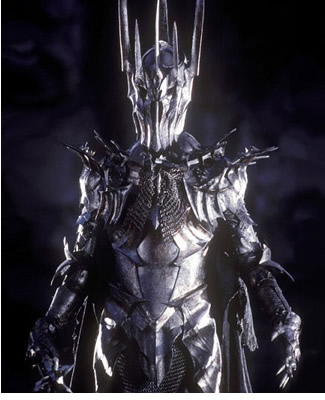 A lot of them look like this. Face is optional, incredibly spikey crown is not.

Usually lurks in an intimidating fortress in a near-uninhabitable landscape, plotting to Take Over the World (if he doesn't already rule it), with hordes of Faceless Goons (who are usually none too bright) and a fearful sinister second-in-command at his beck and call. Additional options include a Quirky Miniboss Squad, a black wardrobe with lots of leather, and command over dark magic or some powerful but vulnerable MacGuffin. He probably has a 0% Approval Rating. Will be a dangerous opponent, even in a straight fight, since Authority Equals Asskicking.

Prone to black, and generally male: hence, Dark Lord. Even more prone to being symbolically associated with death, cold, destruction, pain, and other bad things: CS Lewis' White Witch was associated with white, symbolic of snow, cold, ice, and endless winter, and his Lady of the Green Kirtle with green, symbolic of snakes and poison. When the Fisher King trope is in play, he is bound to live in a Mordor. And it usually is, because the Evil Overlord is often not even human, or no longer human, but a force of evil.

Seldom enjoys Royal Blood, just to make taking him down proper. Nebulous lords of evil tend to work best as a Sorcerous Overlord which often makes a righteous physical butt kicking all the more satisfying. May have a kid.

Generally he has an Evil Plan which he pursues with Stock Evil Overlord Tactics. There's not much else to say that's not covered in the Evil Overlord List (Either of them, for that matter).

If he wins, he'll probably establish The Empire. In fact, The Emperor is at about the same rank or higher in tropes on authority, and a single character is likely to be both. See also Diabolical Mastermind for the step below and Galactic Conqueror, Dimension Lord, Multiversal Conqueror, God of Evil and Eldritch Abomination for the steps above.

Not to be confused with the video game Overlord and its sequels, which feature these characters as Villain Protagonists. Or an Evil Overload, although he will likely have one at some point.

No real life examples, please; calling someone "evil" is rarely a good ides.

I demand examples!! So speaks DOOM!!

Retrieved from "https://allthetropes.org/w/index.php?title=Evil_Overlord&oldid=1759013"
Categories:
Cookies help us deliver our services. By using our services, you agree to our use of cookies.