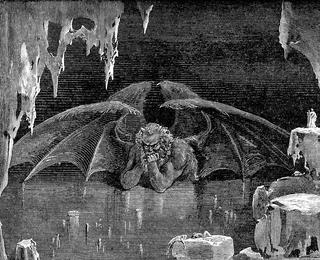 "The Emperor of the kingdom dolorous [...] Well may proceed from him all tribulation." -- Inferno, canto 34

Known also as the (former) Archangel Lucifer ("light-bearer", Latin translation of the Hebrew word heylel, "brightness"), Shaytan, Iblis, Angra Mainyu, Louis Cypher, Old Scratch, Old Nick, the Quare Fellow, the Father of Lies, the Prince of Darkness, the Lord of This World, The Master of Abortions, Beelzebub (based on the archaic Ba‘al Zebûb, literally Lord of the Flies), The Really Angry One, Asmodeus, Mephistopheles, the Morning Star, Samael, El Diablo, the Evil One, Basement Cat, Melkor, Natas... or simply the Devil (or, if you like, the Red Guy), Satan is the Big Bad of most varieties of Christianity and Islam. (But not Judaism and Jewish tradition, in which he plays a role more like God's spymaster or prosecuting attorney.)

No matter what version of Satan is employed, he is usually a shapechanger, capable of taking any form—physical or not—that he cares to. In human form, he is often shown with red or blond hair. All things that hide or distort the truth are in his province, making him also the master of deception and illusion. Consequently, his most common incarnations are wheeler-dealers, bargainers, and con-men.

Despite an overwhelming overconfidence (he represents the Deadly Sin of Pride, after all), he almost always possesses a keen sense of enlightened self-interest. In keeping with the belief of the "most beautiful angel" who fell, Satan takes a handsome face whenever possible, but behind it is often rage and hatred; tearing away that mask, either intentionally or not, is possibly one of the most suicidal things a character can do.

In his more modern incarnations, he is often a Man of Wealth and Taste with a taste for the offerings of humanity's cultural achievements, from wine to music to poetry and stories. His interpretations do not always accord with the official ones.

One of his favorite ploys (it's at least Older Than Steam, as seen in Faust and earlier) is to essentially grant one or more wishes in exchange for the wisher's soul. It's a classic lopsided deal in the Devil's favor—short-term corporeal gain in exchange for long-term infernal torment. This is almost always handled via a physical contract which is usually composed entirely of torturous legalese. Single wishes are almost always handled Literal Genie style, if not perverted outright. In some versions of the story the contracted victim may be able to free himself via a redemptive act or the intervention of God; in modern takes, especially Superhero comics, the hero may take revenge against the Devil via a Faustian Rebellion. In any case, his goal is to lure as many souls to his side as possible, making him an example of The Corrupter.

In recent depictions, Satan is sometimes subverted by giving him an unexpected soft spot that renders him a bit more "human" and less supernatural—he likes kids, or kittens, or snowcones. It doesn't make him any less dangerous (if he's dangerous at all); it just lets the audience think they understand him.

If a series revolves around polytheistic group of gods and goddesses, usually there will be one God of Evil who is cast as a Satan figure, complete with The Paragon Always Rebels, even if it's completely different from their original portrayal. This is usually Hades/Pluto in the Greco-Roman pantheon, Loki in the Norse pantheon, and Anubis or Set/Sutekh in the ancient Egyptian.

Another common plot revolves around Satan's son, presumed to be The Antichrist foretold in the Book of Revelation. Some common subversions are that he's just a normal person, or that he's a she.

Satan is traditionally associated with a host of archdemonic sidekicks, among the best known of which are Mephistopheles, Azazel, Belial, Moloch, Baal, Asmodeus, Beelzebub, and Lilith. These are sometimes seen as servants of Satan (often with more effective power over humans, presumably because their actions are not so closely watched), but are also (with the obvious exception of Lilith) often conflated into alternate names for the same being. (Most of these names, as with "Lucifer", derive from supernatural figures from pre-Christian beliefs in Europe, who were changed into devils as the new faith took over.)

To learn more about the history of Satan, visit the Analysis page.

A common twist is that Satan Is Good, a victim of propaganda; see God Is Evil. Of course, when God Is Evil, he may overlap with Satan.

See also The Legions of Hell. When hiding under an alias, usually a pretty transparent one, this becomes Louis Cypher. If there's more than one we're talking about Demon Lords and Archdevils. You might be interested in his brothers as well, Archangel Gabriel, Archangel Michael, and Archangel Raphael.

For when Satan rocks out, see Rock Me, Asmodeus.

Examples of Satan include:

]
Retrieved from "https://allthetropes.org/w/index.php?title=Satan&oldid=1966302"
Categories:
Cookies help us deliver our services. By using our services, you agree to our use of cookies.