Everything About Fiction You Never Wanted to Know.
Jump to navigation Jump to search
/wiki/J. R. R. Tolkiencreator 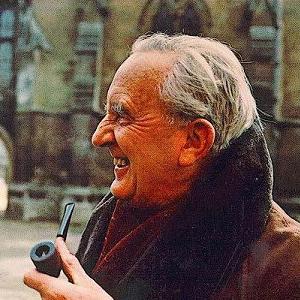 He's a smiling Oxford don with a pipe. How can you not like and trust him?

John Ronald Reuel Tolkien (1892-1973). English linguist (born in Bloemfontein, South Africa), university professor (Leeds and Oxford), Anglo-Saxon historian, CBE, and writer. The man who brought High Fantasy (and, it could be argued, literary Speculative Fiction as a whole) to the modern public. His most famous complete works are his tales of "Middle-earth": The Lord of the Rings and its prefatory novel, The Hobbit. A later work, The Silmarillion, was published in 1977, shortly after he died. In 2007, a fourth book about Middle-earth was edited from many manuscripts to form a consistent narrative, and published as The Children of Húrin.

Tolkien was a polyglot who spoke well over a dozen languages and had some comprehension of up to forty. He even made up a few of his own. Let's just say there aren't many authors who kept interfering with the foreign translations of their books to (correctly, see for instance the article on translator Åke Ohlmarks) point out how the translators aren't translating things properly into their native languages...

The collective term for all the stories about the world of Middle-earth (not actually the world's name, but the name of a super-continent in a world generally referred to as "Arda" by the peoples therein; it is used here for convenience's sake, being the name far better known to the general reader).

The earliest drafts of the great stories of the legendarium were written around the time of World War I, and continued to grow from there on. Tolkien worked on the legendarium for most of his life, continually exploring it further, developing and changing it again and again.

The first book published, The Hobbit, actually wasn't intended as part of the legendarium, only to borrow some material. When Tolkien began writing the Hobbit-sequel that was to become The Lord of the Rings, he moved the story of both books into the Middle-earth setting. This fact is responsible for the seeming inconsistencies in tone and canon between The Hobbit and the other Middle-earth works; this is often mistaken for the world and story having matured up by those who do not know it existed before. He also made some minor changes in a later edition of The Hobbit to match better with The Lord of the Rings, while also providing an in-universe justification for the original discrepancies in the latter.

The published books are:

Only the first three were published during his lifetime; the rest were published posthumously by his son Christopher. Of these, The Silmarillion and The Children of Húrin consist of a single narrative edited together from Tolkien's texts, while the rest are collections of Tolkien's material (with commentaries and notes by his son), ranging from complete narratives to early and new drafts, to essays.

Additionally, there are several titles used for collective bodies of stories (which are used in the fictional world, and also real-world terms to include all relevant material independently of published books): the Ainulindalë and Valaquenta (the creation of the world), the (Quenta) Silmarillion (the First Age), and the Akallabêth (History and Downfall of Númenor in the Second Age).

His other works include several shorter tales (including several written for his children) and his academic writings; among these works are.

The collected Letters of J.R.R. Tolkien are a valuable source of information, both regarding Middle-earth and his personal life and views. Tolkien also aided in compiling the Oxford English Dictionary, and worked on the Jerusalem Bible, a respected Roman Catholic translation.

His greatest fiction was based off his linguistic research and invention. His work on this subject filled well over a dozen volumes.

J. R. R. Tolkien provides examples of the following tropes:
Retrieved from "https://allthetropes.org/w/index.php?title=J._R._R._Tolkien&oldid=1637164"
Categories:
Cookies help us deliver our services. By using our services, you agree to our use of cookies.