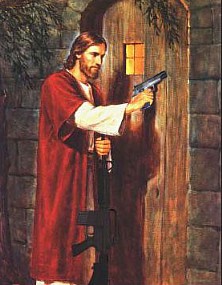 The readers will never see this coming!

As codified by pulp novelist Raymond Chandler, Chandler's Law is a concise but evocative piece of advice for writers who have somehow painted themselves into a corner, plotwise. The addition of a new opponent or complication, usually amidst a burst of violence, can free a protagonist from where he has become mired in the current plot.

Although expressed in a form very specific to the genre in which Chandler was writing, the Law can be easily generalized to handle any type of story.

Participants in National Novel Writing Month (which emphasizes wordcount over quality) know this law by a similar mantra: "If all else fails, have Ninjas burst through the wall and attack someone", as the writer should be able to get at least a few hundred words out of the characters suddenly questioning "Ninjas? What the hell is going on here?"

This undoubtedly finds some origin in the Rule of Drama. If guns are too dramatic for you, try dropping a cow for the Rule of Funny version. If an entirely new plotline results, see Halfway Plot Switch. Diabolus Ex Nihilo operates on this principle with varying levels of success. Conflict Killer is often a result of this.

Not to be confused with anything to do with Chandler Bing, nor Christian Weston Chandler.

Examples of Chandler's Law include:

Retrieved from "https://allthetropes.org/w/index.php?title=Chandler%27s_Law&oldid=1898379"
Categories:
Cookies help us deliver our services. By using our services, you agree to our use of cookies.