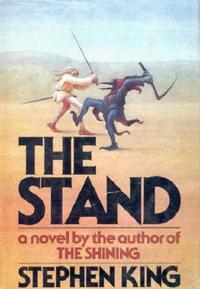 One of Stephen King's most well regarded (and thickest) books, The Stand is a classic work of modern apocalyptic fiction. It is the book which introduces (and primarily describes, on Earth at least) King's most famous villain and "antichrist" figure, Randall Flagg.

King set out to write "An American Lord of the Rings", although he later demurred as to whether he was successful. Still, it is often rated his most popular book, and, along with IT, one of the most important works of King's early period.

The story concerns the travels and travails of well over a dozen characters following intersecting story arcs across the United States during and after an apocalyptic Super-Flu (nicknamed Captain Trips) kills 99.4 percent of humanity. The survivors are drawn into two camps on either side of the Rocky Mountains: One headed by the 108-year old, Moses-like Mother Abagail, is based in Boulder, CO; the other based in Las Vegas is headed by the demonic Flagg.

First published in 1978, the novel was reissued in 1990 in a "complete and uncut edition" containing about 400 additional pages of material from King's original manuscript.

A eight hour made-for-TV miniseries based on the novel aired for four nights on ABC in 1994. As of late 2011, a theatrical adaptation is being attempted for the second time-the first attempt was made during the 1980s and failed because of the difficulty adapting such a long novel for a big screen release, and the novel's dependence on narration to tell the story.

Not to be confused with the manifestations of one's inner powers.

Tropes used in The Stand include:
Retrieved from "https://allthetropes.org/w/index.php?title=The_Stand&oldid=1904356"
Categories:
Cookies help us deliver our services. By using our services, you agree to our use of cookies.