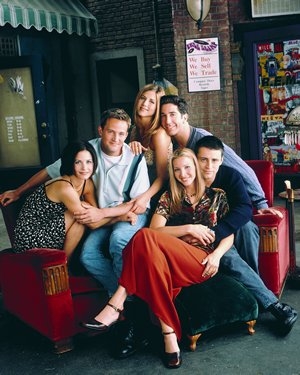 Not pictured: The fountain.

A sitcom that ran from 1994-2004 which centers on a glamorous circle of Manhattan singles.

Though admittedly formulaic, Friends featured a top-notch cast and, at least in the early seasons, some legitimately outstanding writing. The Ross-and-Rachel relationship easily ranks as the most tired Will They or Won't They? plot in sitcom history. Interestingly, they became a couple early on, only to break up on account of Ross' cheating. Despite this, the characters managed to reconcile and even conceive a child without officially getting 'back together.'

A giant success in its day (the stars graced the covers of a dozen entertainment and gossip magazines every week), and accordingly one of the more polarizing shows of recent memory. "Seinfeld or Friends?" became a kind of shibboleth used to determine one's television street cred.

Friends is famous for its Idiosyncratic Episode Naming that referenced how the episodes would be most likely to be referred to when discussed among casual fans. All episode titles follow the format "The One with..." or "The One Where...". The two exceptions are "The Pilot" (which, even then, has been RetConned with the name "The One Where Monica Gets A Roommate") and "The Last One".

The main cast of Friends grew to be real-life True Companions; Tom Selleck commented in an interview that he often felt 'left out' during the filming of his appearance (a not-uncommon sentiment among guests on a hit series, but nonetheless). The cast as a whole demanded equal salaries, leading to the show holding the world record for "best-paid women actors in a TV show" for many years. And they insisted that, should they be nominated for awards (which they were), they all be in the same category: you couldn't nominate Matt Le Blanc (Joey) as "Supporting Actor" and David Schwimmer (Ross) as "Lead Actor"; both of them had to be Lead or Supporting.

Friends is the Trope Namer for:
Tropes used in Friends include:

Tropes A to I

Retrieved from "https://allthetropes.org/w/index.php?title=Friends&oldid=1861430"
Categories:
Cookies help us deliver our services. By using our services, you agree to our use of cookies.