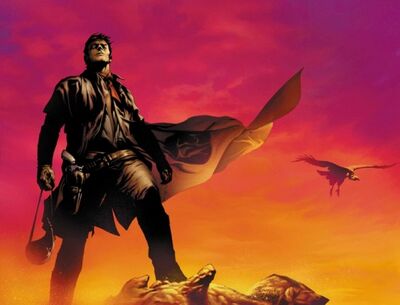 It's every cow's dying wish to have her hide made into something this awesome.

A Longcoat is the ideal action-hero garment, more practical than a cape but infinitely cooler than a sport coat or no coat. In addition, a Longcoat of any level of 'billowy-ness' makes an ideal cover for producing any number of weapons, tools, supplies and whatnot. Certain styles of Longcoat are deliberately designed to distort the wearer's frame, making their wearer's access to Hammerspace almost believable to mundane eyes. This distortion of the wearer's real shape also makes it genuinely harder to land an accurate attack on them.

Like capes, longcoats capitalize on the dramatic effect of having something that flutters behind you. A variant involves jackets and excessively long shirts, but having less material to billow in the gusts necessarily makes such people seem less badass. And of course, when the wearer of a Badass Longcoat takes the coat off, it's a sign that he's about to do some major damage.

The most common types of long coats are dusters and trench coats. The principle differences between the two are that dusters are longer overall, usually reaching nearly to the ankles, and since they're designed for horseback riding, have a long slit up the back as far as the waist. Dusters are also generally cut along fairly boxy lines. A trench coat, on the other hand, is usually more shaped, reaches to the knees or slightly below and the back slit generally only reaches mid-thigh or hip-level. Trench coats also usually feature a belt and epaulets. It should be noted that one way to tell if a trench coat indicates a spy or private investigator or is a Badass Longcoat is by whether it's buttoned and belted or not. A Badass Trenchcoat is never closed.

A third style is the great coat, a predecessor of the trench coat but usually much heavier, and with either a wider collar that can be turned up to protect against the wind or a short shoulder cape. Later great coats lost the cape, becoming a longer, heavier, double breasted overcoat, but retaining the name. Great coats were typically worn either buttoned, losing some of their badassitude, or simply draped over the shoulders without putting the arms into the sleeves, greatly increasing their badassitude. They're most often associated with 19th Century naval officers, Nazi German officers, and Russian soldiers. The Inverness cape is a lighter garment with a very similar appearance to the caped greatcoat. The cape, however, is longer, reaching slightly past the wrist rather than only to the elbow, and an Inverness cape has no sleeves at all.

Going back even further is a coat called a justaucorps (essentially the long coats of the 17th and 18th centuries; think Pirates of the Caribbean) though it has to be worn a certain way to pull off the Badass look.

A less modern example would be the Badass Long Robe. Cool Shades are a nice accessory, as are tacking on a Nice Hat and mask to achieve the Coat, Hat, Mask Effect. If the mask in question is a gas mask, then it's Gas Mask Longcoat. The Badass Longcoat is often combined with a pair of guns, either revolvers for a western or a pair of semiautomatic pistols or submachine guns in the modern day and beyond, for extra effect. Some characters will pack enough weapons in their longcoats to outfit a small army.

Longcoat-wearing heroes probably started with Westerns (for dusters) or Film Noir, (for the classic trenchcoat) but became especially common in the public mind after The Matrix.

The Badass Longcoat is closely associated with The Stoic. Compare Badass in a Nice Suit. Sometimes part of a Hot Chick in a Badass Suit's ensemble. Not related to Badass Longcat. Not to be confused with Conspicuous Trenchcoat, a specific type of coat that is also long, or Coat Cape, where a coat is worn over the shoulder like a cape for what is often a similar visual effect.

(Please note that this trope is about the coat, not the person. Please include information about the coat when adding examples, rather than simply listing a character. The coat is important.)

Examples of Badass Longcoat include:

Retrieved from "https://allthetropes.org/w/index.php?title=Badass_Longcoat&oldid=1957678"
Categories:
Cookies help us deliver our services. By using our services, you agree to our use of cookies.