Everything About Fiction You Never Wanted to Know.
Jump to navigation Jump to search
/wiki/Steven Moffatcreator 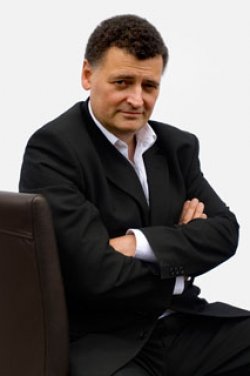 He feeds on fear.

Writer of Coupling and writer and executive producer of Jekyll and Sherlock. But perhaps best known for writing very, very scary, yet heartwarming and generally hilarious stories for the new Doctor Who.

In 1996, he wrote the short story "Continuity Errors", his first work on Doctor Who. His next Doctor Who story was the very non-canon parody Doctor Who: The Curse of Fatal Death. Nowadays, he occasionally references both stories in his canon episodes.

He won a Hugo Award for "The Empty Child" / "The Doctor Dances", another for "The Girl in the Fireplace", then got a third in a row, along with a Bafta, for "Blink", and yet another for "The Pandorica Opens"/"The Big Bang". His series four nomination, for "Silence in the Library"/"Forest of the Dead", lost out to a certain sing-along blog. Any list of the greatest Doctor Who stories of all time are likely to contain at least one of these.

He is now the head writer and executive producer of Doctor Who from series 5. [1] He is starting to acquire "The Moff" or "The Grand Moff" as a nickname (and occasionally "King of Nightmares"). He personally ensured that the Doctor's daughter (well, offspring), Jenny, did not die permanently in "The Doctor's Daughter", then forgot he'd done it until transmission. Undoubtedly a Promoted Fanboy, upon becoming executive producer he mentioned that he'd applied for the job once before, but "The BBC already had someone else in mind… also, I was seven at the time."

All too aware of the British press and its love for spoilers, he will frequently throw out red herrings, calling it "by far the best way of communicating." He openly lies, teases, and generally whips his fanbase up into a frenzy just as often as he possibly can, and seems to enjoy it a little too much. Most notably, although Sherlock was commissioned for a second and third series at the same time, he went back and forth on whether or not series 2 would be the show's last until the night "The Reichenbach Fall" aired; this announcement may have been the only thing that kept fans from abandoning the fandom en masse after that particular series conclusion. Fans have come to expect this sort of behaviour from him, but that doesn't mean they have to like it.

He's known to have no love for Star Trek: The Next Generation and Voyager-style Techno Babble and is much more likely to give you the Timey-Wimey Ball (to the extent that the Doctor Who episode "Blink", written by him, is the Trope Namer for Timey-Wimey Ball).

Born in 1961 in Paisley, Scotland (hometown of Doctor Who star David Tennant) and a former teacher.

His work on Doctor Who offers examples of:

His other writing provides examples of:

Retrieved from "https://allthetropes.org/w/index.php?title=Steven_Moffat&oldid=1492512"
Categories:
Cookies help us deliver our services. By using our services, you agree to our use of cookies.