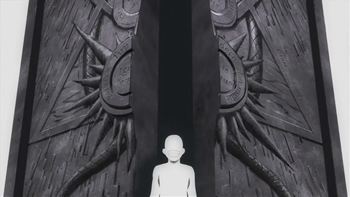 Step inside, don't be shy! There's everything you'd ever want to know... for a price.

The Gate of Truth is a central nexus of all knowledge in the universe, or something close to that. Tends to be difficult, if not nearly impossible to reach. If the answer is Forty-Two, then chances are, the question is somewhere in there. It may or may not be sentient, and may or may not be actively collecting knowledge, but what's important is that it already has a lot of it in stock. If it's known at all to people, those who know about it are very likely to be an elite of some sort, and will more likely than not be killing each other just to get there.

God, or something like that might be guarding it to protect all the secrets within, if they are not the same being as the gate itself. Else, there's probably a toll-keeper who requests a small fee before you can take a peek at its vast repository. The point is, the knowledge is collected, and a block has been installed that keeps everyone from just wandering up and partaking of it.

Whether or not the knowledge gained was worth the cost depends on which end of the Sliding Scale of Idealism Versus Cynicism the story lies.

Note that the Gate of Truth need not necessarily be a literal gate. It could be a tree, a scary door, or even the corner of Rhodes and Fourth Street. "All knowledge" need not be a literal description, either. Simply a lot will do.

See also Library of Babel, Magical Database, Great Big Book of Everything, Tomes of Prophecy and Fate. Super-Trope to the Akashic Records.

Examples of Gate of Truth include: