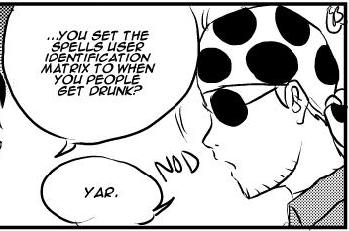 Ye 'pected me to run me ship sober?.

And then, sometimes, there's a kind of jokey science fiction which doesn't even care if it's total rubbish. It may explain the scientific principles on which the phlebotinum works, but the principles are so outlandish and/or obviously not true that the audience just has to shrug and say, "Well, it's comedy". In a sense, this is Did Not Do the Research done deliberately.

Oftentimes, Noodle Implements are needed to harness nonsensoleum. Other times, Achievements in Ignorance are the catalyst that allow nonsensoleum to work, and it will stop working once the characters realize that it shouldn't be possible. If they can still do it despite recognizing that what they're doing should be impossible then it's Beyond the Impossible.

Can be seen as an acknowledgement of the Rule of Funny. Compare Better Than a Bare Bulb. A level of nonsense beyond this is Insane Troll Logic, while a nonsense explanation that we're expected to actually take seriously is a Voodoo Shark.

Sometimes justified by The Spark of Genius or Psychic Powers.

Examples of It Runs on Nonsensoleum include:

Retrieved from "https://allthetropes.org/w/index.php?title=It_Runs_on_Nonsensoleum&oldid=1680950"
Categories:
Cookies help us deliver our services. By using our services, you agree to our use of cookies.