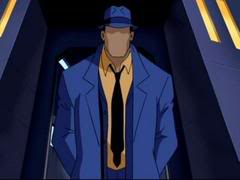 That's a hell of a poker face.

The human brain is hardwired to recognize faces. Humans will even see faces where there are none, such as the man in the moon. So there is something very disturbing about a person without a face. Meet The Blank.

The Blank is a humanoid character with no face. Perhaps it is a disguise to unsettle opponents. Perhaps they were a victim of some entity that steals faces, a common form of Transformation Trauma. Or perhaps they're just that good at poker.

Not to be confused with The Faceless. Compare Faceless Eye and Eyeless Face. The Nondescript might as well not have a face, given how tough theirs is to recall. See also Malevolent Masked Men and its extra-blank subtrope White Mask of Doom.

Has nothing to do with Story of the Blanks.

A subtrope of this is The Noseless.

Examples of The Blank include:

Retrieved from "https://allthetropes.org/w/index.php?title=The_Blank&oldid=1851529"
Categories:
Cookies help us deliver our services. By using our services, you agree to our use of cookies.