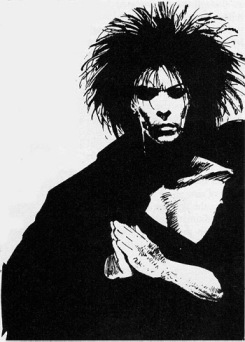 Dream of the Endless.

The Sandman is a Comic Book series (later collected in a series of graphic novels) by Neil Gaiman, chronicling the story of the King of Dreams and his family of fantastic, Anthropomorphic Personifications of cosmic powers. Described as "A story about stories", The Sandman was a comic series that could tell any tale, in any time period, in any style or setting. Historical figures were common, as were allusions and homages to many classic works such as the Arabian Nights and the plays of William Shakespeare. The series lasted for 75 issues, from January, 1989 to March, 1996.

At the center of the series is Dream, also known as Morpheus, the Sandman, and dozens of other titles. He rules over the dreaming world that mortals enter when they sleep, and he is also the patron of writers and storytellers, since a story and a dream are in many ways the same thing (he is described as "The lord of all that is not, and shall never be"). As old as the universe and more powerful than many gods, Dream is vain, proud, and stiff-necked. Throughout the series, tragedy and suffering teach him humility and compassion for others, but it's hard to change for the better when you're billions of years old and very set in your ways ...

It is also notable for its epic overarching plot. Over the course of a decade, every tiny detail in the comics must be watched. Minor characters from the first books are big players later on. Foreshadowing from as far back as the first issue comes into play in the last. Morpheus' complicated plan borders on Gambit Roulette, but the sheer power and meticulous nature of the character make it believable that he could manipulate primal forces to work around him.

The series attracted a huge number of fans from groups who aren't traditionally seen as readers of comics, most notably young women. By the end of its run, it was selling better than Superman, had attained heaps of critical praise and industry awards, and became the first and only comic book to win the prestigious World Fantasy Award For Short Fiction.

The series has been followed by a number of one-off sequels and side stories, also by Gaiman:

The series has spawned a number of Spin-Off series by other writers as notable characters from the books tell their tales. These include:

There is now rumoured to be a TV series in the works with Eric Kripke (former show runner of Supernatural) potentially being slated to take part.

Tropes used in The Sandman include:
]
Retrieved from "https://allthetropes.org/w/index.php?title=The_Sandman&oldid=1846547"
Categories:
Cookies help us deliver our services. By using our services, you agree to our use of cookies.