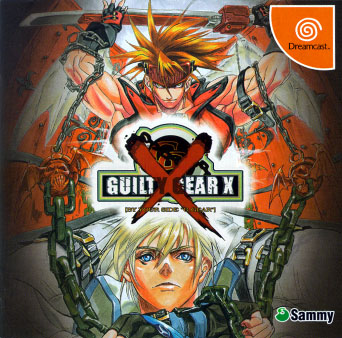 Guilty Gear is a Fighting Game series created by Arc System Works. The franchise started out as a cult classic, but got noticeably better attention when its sequels were released.

The story of the game takes place around the year 2180, in a chaotic, mystical future world. In 2010, mankind discovered an unlimited energy source of incredible power, which was fittingly labeled as Magic. Even with the various energy problems solved, however, wars still continued. With the power of Magic and science, living weapons known as "Gears" were created. These Gears eventually Turned Against Their Masters, beginning a century-long global war known as the Crusades where the Sacred Order of Holy Knights, fighting for the human race, was able to defeat Justice, the leader of the Gears. Justice was locked away in a dimensional prison, and all other Gears seemingly ceased to function, bringing an end to the Crusades.

In the first game, set five years after the end of the war, a Gear named Testament hatched a plan to free Justice. In response to this threat, the United Nations began a fighting tournament in order to find fighters who would be able to defeat Testament and Justice. Ultimately, the immortal Bounty Hunter Sol Badguy brought down Justice again, and an uneasy peace began.

In the second game Guilty Gear X, it appears that a new Commander Gear has appeared less than a year later. The United Nations offers a bounty of 500,000 World Dollars for the destruction of this new Gear. Unfortunately, it turns out that the Gear in question is a sweet and innocent girl named Dizzy who wants nothing more than to live in peace and happiness. Sol Badguy, after defeating her, spares her, and the bounty falls to a chef named Jam Kuradoberi, while Dizzy goes to live with the Jellyfish Pirates, a group of Robin Hood-esque pirates who travel the world in an airship.

In the third game Guilty Gear XX (or Guilty Gear X2 in North America), a secret organization called the Post-War Administration Bureau starts attempting to capture or gather information on the various fighters from the past tournaments, while at the same time, I-No, a servant of the creator of the Gears—known only as That Man—starts manipulating them against each other for reasons unknown...

After a whole bunch of incremental upgrades to XX—#Reload, Slash, Accent Core and Accent Core Plus—the series finally got a fourth entry in Guilty Gear 2: Overture... and an Unexpected Gameplay Change to Real Time Strategy mixed with hack'n'slash. In this game, Ky Kiske has become the king of his own country; too bad that it's not only under attack by a mysterious army controlled by Little Miss Badass Valentine, but all the sealed Gears are mysteriously vanishing. He sends for help from his old rival Sol, who is now a vagabond traveling with a young warrior named Sin.

Arc System Works went on to create other games such as Battle Fantasia, Sengoku Basara X, and later a proper Spiritual Successor to Guilty Gear in BlazBlue: Calamity Trigger. In May 2011, Arc System Works successfully bought all the rights to the Guilty Gear IP. Though when they plan on continuing the series and if they plan on keeping it a fighting game remains to be seen.

In March 2012, Arc System Works finally announced news on a new installment... which turns out to be yet another new version of XX for Arcades as well as Playstation Network and Xbox Live Arcade, called Guilty Gear XX Accent Core Plus R. This updated version of Accent Core will feature online play, all of the features of the original console version of Accent Core Plus had, and the boss characters Kliff and Justice finally made playable and tournament-viable for Arcades. Currently, it is set for a Summer 2012 release, but this is subject to change.

This game has a character sheet.

Duel 1. Let's Rock!
Retrieved from "https://allthetropes.org/w/index.php?title=Guilty_Gear&oldid=1726258"
Categories:
Cookies help us deliver our services. By using our services, you agree to our use of cookies.