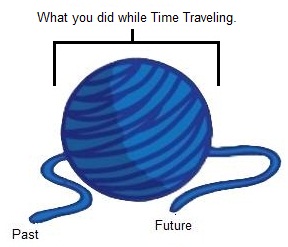 "People assume that time is a strict progression of cause to effect, but actually -- from a non-linear, non-subjective viewpoint -- it's more like a big ball of wibbly-wobbly... timey-wimey... stuff."
—The Tenth Doctor, Doctor Who, "Blink"

Excepting mundane travel from the past to the future at a rate of one second per second,[1] no human has ever experienced Time Travel first hand. Indeed, we don't know if it's even possible.[2] So debating which time travel theory is right is much like trying to find the best flavor of Kool-Aid. Fans are aware and accepting of this, just like no one minds when Our Monsters Are Different, or two different series have different rules for magic, so long as the series' own internal rules are consistent.

Of course, sometimes they aren't. The Timey-Wimey Ball is the result of a series or movie where the writers are a wee bit confused or forgetful about exactly which kind of time travel can happen, sometimes within the span of one episode! One day You Can't Fight Fate (or at least not without the Butterfly of Doom coming along), but the next you can Screw Destiny and Set Right What Once Went Wrong by killing Hitler and changing the past for the better. Especially headachy because there's no Temporal Paradox, or if there is it's totally arbitrary.

The standard Hand Wave, if one is given, is that time is very complicated, and the particulars of the situation affect how the rules apply in ways that a layperson wouldn't understand. Which is one of the many reasons why some people absolutely frickin' HATE time travel...

Despite the similar images the name might conjure, this is unrelated to Swirly Energy Thingy (although a Swirly Energy Thingy might very well have Timey Wimey effects). Likewise, a Continuity Snarl is not necessarily related, though the presence of Time Travel induced retcons can certainly make a character's past seem like a tangled up ball of yarn.

Compare "Close Enough" Timeline. Occasionally, anything involving this may decide to pull out the Temporal Paradox card. A Time Crash is what happens when this isn't in play. See also Narnia Time. Totally unrelated to ball-shaped behavior tropes and possibly The Multiverse. You had better hope it is unrelated to Happy Fun Ball.

Examples of Timey-Wimey Ball include:

McGonagall: Tell me your conclusions, but please, don't tell me how you figured it out.

Lu-Tze: For a perfectly logical chain of reasons, Vimes ended back in time even looking rather like Keel! Eyepatch and scar! Is that Narrative Causality, or Historical Imperative, or Just Plain Weird?

Doctor: They're sealed inside of a bubble. It's not a bubble, but just think of a bubble.

Lister: Hey, it hasn't happened, has it? It has "will have going to have happened" happened, but it hasn't actually happened happened yet, hactually.
Rimmer: Poppycock! It will be happened; it shall be going to be happening; it will be was an event that could will have been taken place in the future. Simple as that. Your bucket's been kicked, baby.

In four games, the precise nature of time has never remained constant. Ocarina of Time contains at least two very different mechanics, which theorists often find irreconcilable (and downright strange). Ages mechanics only begin to make sense when one sacrifices logic to storyline completely, and Majora's Mask Goddess of Time takes the whole thing to hell by drawing questions of omnipotence into the debate.
—The Internet, Trying to solve the mess that is the Zelda Timeline.

The Prince: Most people think time is like a river that flows swift and sure in one direction. But I have seen the face of time, and I can tell you, they are wrong. Time is an ocean in a storm.

Dave: see the thing with time travel is
Dave: you cant overthink it
Dave: you just got to roll with it and see what happens
Dave: and above all try not to do anything retarded

Imagine four balls on the edge of a cliff. Say a direct copy of the ball nearest the cliff is sent to the back of the line of balls and takes the place of the first ball. The formerly first ball becomes the second, the second becomes the third, and the fourth falls off the cliff. Time works the same way.

"Time travel, it's a cornucopia of disturbing concepts."