The Library of Babel

Everything About Fiction You Never Wanted to Know.
(Redirected from Library of Babel)
Jump to navigation Jump to search 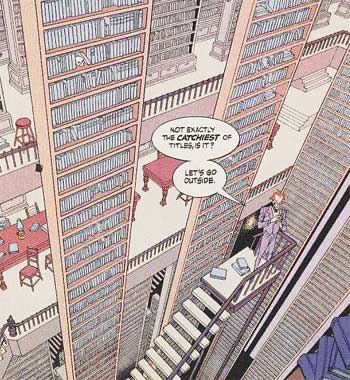 All that is written, all that never was, and all that ever might be.

Step into this library quietly, with reverence. Don't raise your voice, don't run. And for god's sake, no smoking.

Few are the mortals who are allowed to enter, let alone read the tomes here. Have a question? There's a book here to answer it. Need to learn about a collection of MacGuffins? You'll find those half-way down shelf four. Wish to be privy to the secrets of the innermost universe? You may have to ask for assistance.

This is not your typical local library. Inside this library, you can find the Tome of Eldritch Lore, Tomes of Prophecy and Fate and the Great Big Book of Everything if you know where to search... which is quite unlikely, given that every book ever printed (and some that aren't) sits on its dust-coated labyrinthine shelves in its cavernous, dimly lit rooms, and its organisational structure predates the Dewey decimal system by about 3 millennia. Sadly, even containing the knowledge of the whole universe, it seems to be lacking any sort of Hot Librarian. This place attracts the spookier librarians.[1]

And trust us... you don't want to get Cheeto dust on these pages. You just don't.

The Internet and computers in general have made this a bit of a Discredited Trope[2] as far as modern and sci-fi stories go; you can access information about almost anything in the same way you're reading this, so there's little reason to put it all in one place. And even if you want to centralize it, one 700-MB compact disk can hold over 200 novels, and compared to modern computers 700 megabytes isn't a lot of storage space at all. However, it's still a popular idea because shelves of books as far as the eye can see, big enough to get lost in, looks cool. Of course, a Metaverse / Cyberspace library may well look like a cross between the Library of Babel and a Design Student's Orgasm. With Tron Lines.

Examples of The Library of Babel include:

Lucifer walked slowly along the surface of the library's dark aisle of ethereal water that was connected to cosmic engines located at Dragylon's core. His jewel-encrusted wings fluttered behind him like the robes of a scholar while he glanced at the towering bookcases to the left and right of him. He strode through shafts of light descending down from the sphere's atmos­phere through certain panels that were open on each side of the library's vaulted roof, eyes flashing brightly each time he passed through the pockets of thick shadows, the darkness consuming all but the muscled outline of his golden form like a solar eclipse. The library consisted of rolled scrolls of ivory parchment stuffed into open sleeves, with each sleeve stacked on top of one another on the shelves. Small flaming symbols of angelic and cherubic origin hovered in the space of each sleeve's open circle, serving as a coded filing system created by his scribe Medius. Lucifer's own voice whispered at him from behind the scrolls' fiery symbols as he walked past them, swirling around him in cosmic drafts of devilish diatribes and prideful proclamations.

Pete: Does that include comic books?

They say Thoth's Library holds all the books that have ever been written, or ever will be. Doesn't sound likely to me - in my experience, 'they' say many things which aren't true.
—Magnum Opus

"If you're going to lie to an all-knowing Knowledge-Spirit, you should at least put some effort into it."