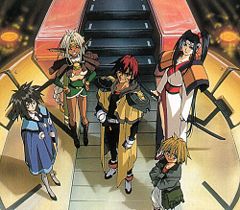 Based on a popular manga by Takehito Ito, the first show in Sunrise's Toward Stars universe, Outlaw Star is a Retrofuture Space Opera writ large.

In the universe, there are three major powers: the Space Forces who enforce the law, the Space Pirates who defy it and the "outlaws" who owe allegiance to neither side. Gene Starwind, a big fish in the small pond of his home planet, dreams of going to the stars. A simple bodyguard job quickly spirals out of control and ends with him coming into possession of the most advanced spaceship in the galaxy (which he dubs the Outlaw Star) and the biological navigation system that controls it, an Artificial Human named Melfina.

This is only the beginning of his problems, as between trying to scrape together enough cash to pay for his new ship's upkeep, he has to contend with both the Space Forces and pirates trying to get the ship back as they all race against each other to reach the mysterious "Galactic Leyline". Helping Gene are his young partner Jim Hawking, the exotic but hot-tempered Catfolk alien Aisha Clan Clan, the sword-wielding assassin Twilight Suzuka, the somewhat incoherent shipboard AI Gilliam, and others who come and go from the plot. If you like "pulp"-era science fiction, you'll like this show.

Outlaw Star is available uncut on VHS and DVD from Bandai in North America, and an edited version of most of the series has been shown on both Toonami and Adult Swim. The show is available in Australia from Madman.

Rumor has it that Joss Whedon's Firefly was heavily influenced by Outlaw Star. This has, appropriately enough, been Jossed by the man himself on multiple occasions in interviews, who says that he was actually inspired by The Killer Angels. Certain common elements between the two still raise a few eyebrows, though.

See also Angel Links, also a part of the Towards Stars universe.

Tropes used in Outlaw Star include:

The episode, of course, is the kind of thing you get when someone does explain a Noodle Incident. It's every bit as weird as your imagination would make it out to be.

Retrieved from "https://allthetropes.org/w/index.php?title=Outlaw_Star&oldid=1962698"
Categories:
Cookies help us deliver our services. By using our services, you agree to our use of cookies.